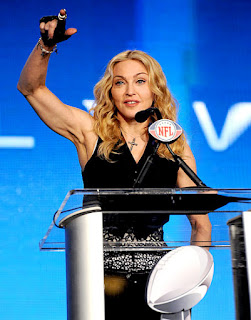 OK, so Madge totally rocked the Superbowl. Well, as long as you ignored the fact that the top half of her face was completely immobile. Bitch had some SERIOUS crazy eyes. She's remarkably lithe for a 60-year-old woman, but good lord, WHAT is going on with her arm pits? Is that where she injects the blood of virgins that gives her the bod of a tween on steroids? 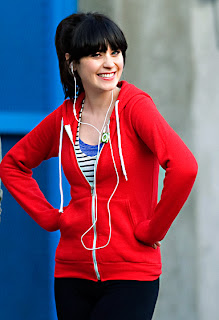 I'm nursing a mega girl crush on Zooey Deschanel. She's ADORABLE and she's pretty much the sole reason I have bangs. Also, The New Girl makes me laugh out loud every single week. Love that show. 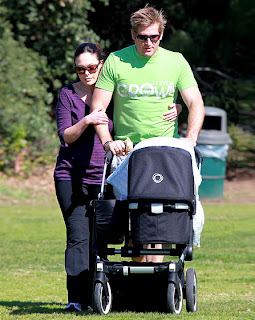 I've had a soft spot for Lindsay Price ever since she played a hard nosed reporter for the Beverly Beat/Steve Sanders's baby's mama. And then she was in the Lipstick Jungle or that other Sex in the City knockoff, I can't keep them straight anymore and I honestly think I was the only person who religiously watched both of those shows, and she dated Andrew McCarthy. I mean, how do you not like someone who dated Andrew McCarthy? And then Curtis Stone had that show where he'd find random people in the grocery store and then take them home and whip up a gourmet meal. I'd be lying if I said I didn't look for him every single time I walked into Whole Foods in spite of the fact that I'm sure I'd be publically humiliated by the state of my kitchen. So, that's a lot of backstory to explain the fact that I'm super happy they procreated. 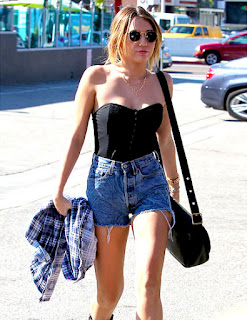 Um, Miley, I know you were young when Britney had her break down, but you should know that before she went and shaved her head and was spotted driving around with her 6-month old child on her lap, she walked around wearing outfits almost EXACTLY like this one. Just an FYI.

I was going to say wow, Madonna is 60! 53 definitely sounds more like it. But still.

Wait. The girl who plays Jess on New Girl is named Zooey? I thought she was played by Katy Perry?

I think Matt needs a virtual slap for that one.

Also Madonna scares me a little. But more so now that I've seen her pits.

I also predict Miley will be beating the crap out of photogs cars with an umbrella before long, then Billy Ray will have to swoop in and save the day with his magic mullet.