I give you...the OTHER Roeckers... 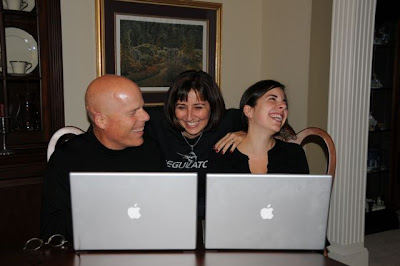 When Laura approached us to write a guest blog in honor of Lisa’s birthday, we weren’t quite sure where to start. So the Regulator (aka Mom), did what she usually does to get inspiration: a Google search. After typing in the words, “Lisa + Cameltoe + Tivo + Justin Bobby + Glee + overalls” she was brought to Fox’s Intranet and hacked her way in. Then she stumbled upon this gem: an unedited version of the original Glee Trailer. As you will see, some of the scenes were eventually cut.

Happy Birthday to our Dancing Queen. Aren’t we all lucky Lisa chose to write instead of dance? And just so you know, we will NEVER stop believing in both of you!

*A special thanks goes out to our dad for his unwillingness to edit as he filmed us in our early years. Without him, we never would have access to countless ballet recitals, random footage entitled "Girls Goofing Around", 20+ years worth of Christmas mornings and family vacations full of our trademark "squirrel" look. There's nothing like documenting those awkward tweenage/teenage years. Especially when there's a little something called "The Rippr" that can transform those moments into humiliating blog birthday posts!

And Laura, you've set the bar high for birthdays on this blog. Just wait until February rolls around. Payback is a bitch my friend.

Nice work guys. Totally humiliating and highly entertaining. What more could a girl ask for?

P.S.
I just realized that mom is wearing the Regulator t-shirt in the picture. Priceless. We are officially the lamest family on the planet. Who does this stuff?

And for the record, I will disown the person who posts this to YouTube or Facebook. Seriously.

OMG. Christmas, I mean Friday, has come early!! AWESOME. This was totally worth the wait!
Happy Birthday, Lisa!
I'm going to rewatch this.

LMAO!! That was seriously amazing...I especially liked the 'ballet bump'.

I am going to handle my comments in only a way you can really appreciate.

1. Green strapless dress with beer bottle. No more words. Seared into my brain. No adjectives can explain the bliss I feel from seeing that video.

3. Triangle hair. I have tears in my eyes.

5. Happy Birthday, girl. I loved getting to talk to you in person tonight and I can't wait to see what you concoct for Laura's bday.

HAPPY HAPPY BIRTHDAY!!!! What a fantastic family you have to embarass.. oops, I mean honor you like this!!! That video rocked!!!

ROFL - that was BRILLIANT. Totally lived up to the hype! Good job, Roeckers.

Happy Birthday Lisa! Watch out Laura, we all know paybacks are a bitch.. February should be interesting, or will December have some fun as well! Looks like you all are in for it!! Way to go Roeckers.. I needed a good laugh/cry this morning!! Brings back so many fun memories...

Might be the best post EVER! Well played Roecker family! I couldn't stop laughing as I was watching.

No worries Lisa, it is locked and loaded on Facebook. (jk!)

AWESOME! Knew you gals had to get your talent from somewhere :) Mom and Dad Roecker rock!!! (not to mention little sis)

Hahahahahaha! This totally made my morning!!!

Excellent editing! (Dang, I want to be in the Glee trailer!)


You guys are the COOLEST SISTERS EVAH!

(Though I'm pretty certain the world is glad you ditched ballet to take up writing.)

Bedsides the triangle hair and the drama queen breakdown on the sofa (cracking up) my fave part is the photo of your precious family (Mom in the regulator t-shirt) in hysterics!!!

That video was AWESOME.

That was fantastic! Happy Birthday Lisa! I am so glad none of my siblings have video editing skills :)

man i was hoping for some dirt! :) we are glad they are both writers too or we would not get to hang online with them.

This is AMAZING. Lisa, you have an awesome family because they worked together to compile such a wonderfully embarrassing video for you! I want to give them hugs.

Happy Birthday! What a genuinely genuine gift that is. It took time and thought and obviously a ton of love. Yay for family!!

That rocks! Have a great birthday. :)

Woo Hoo! This was so awesome! I absolutely loved it. And I won't stop believing in you guys either.

And dude, can I hire your family to make my birthday video?? They rocked it out.

OMGosh, my verification word is PANTI. I'm not kidding. ROTFL!!

I'm dying here! And sadly, I can see myself in so many of those "uncut" scenes, except, I had short, boy hair. Not pretty.

Thanks for the laughs!

Happy birthday! That was chock full of awesome.

That is awesome! Happy Birthday, Lisa!!!

Happy birthday, dear! I hope you have a good one. Aren't humiliating home videos THE BEST?

All you all posts are so entertaining! Can you believe the world we live in? The web can be a cool place. Thanks for the shout out Laura.

That was effing hilarious!

Lisa, you must be so very disappointed that your scenes got cut from Glee!! Rude, I tell you. Rude. Hollywood is a cutthroat bitch, isn't it? :D

Happy Birthday Lisa! And it was wonderful to see the rest of the clan. Do y'all wear anything but black? :)

Oh man, the blue dance outfit and the Marcy haircut are fabulous! I'm loving your family :)