Ok, so I've gotten some fabulous time suck suggestions in the comments and I think this week I'm going to try a handful of them. Yes, I really am that desperate. Don't judge me. The City isn't on until tomorrow night.
First up: Knitting.
The lovely Annette Lyon suggested I take up this relaxing pass time and this image immediately came to mind. 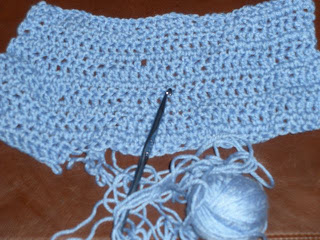 That sad picture is a crochet scarf I started in July 2008. I remember it perfectly. We were in Baltimore visiting Laura and crafty little Stacey was knitting a baby blanket. As I watched her needles fly knitting one and pearling two I was jealous. She was doing something. She was creating. Meanwhile, the highlight of my life was reality television and I was stuck working a job I despised.
Watching her blanket grow over the course of the weekend I knew exactly what I needed to do. I had to start knitting. Visions of myself whipping up beautiful sweaters while watching The Real Housewives of Orange County danced before my eyes. Bliss.
My dreams were shattered when Stacey broke the news to me that knitting is like a 9/10 on the crafty scale. Sadly my skill level hovers in the low twos. Like any good sister she knows my limitations. Anyways, she figured crocheting might be more my speed.
Yeah, I think my little picture demonstrates that was clearly not the case.
A week later Laura and I had the big talk and decided to write a book. I haven't touched that wretched scarf since.
Hell. Yeah.
at December 01, 2009

I gotta say, I'm impressed you even attempted to knit and crochet. Those needles scare me into staying far, far away. I have no doubt I would find a way to trip over them and stab myself (even if watching TV).

Lisa that is too funny. I've tried my hand at crocheting too and I'm pretty sure my skill level is pretty similar to yours. It's good to try things like that every few years, just to remind ourselves why we aren't crafty. :)

baahaahaaa...I love it! I soooo like to think of myself as crafty. I have dreams of opening an online Etsy boutique, but it takes me YEARS to finish anything. I have been saving a few of my 'ahem' better craft projects to post on my blog.

Why don't you try your hand at spray painting something? hehe...that's what I do when I want to feel like I'm "crafty" these days.

knitting and crocheting are highly over-rated. Go for something like counted cross-stitch....you KNOW you've done this at one point or another....

Ha ha. My skill level hovers around there too, which is pretty embarrassing considering my mom is a "professional" quilter! Her quilts have been on exhibit around the country. Maybe it skips a generation?

Good morning, ladies! As usual, you guys crack me up.

I'm passing along an award to you and your fabulous blog. Stop by Book Dreaming to see which one! :)

Last winter I decided to start crocheting while I watched American Idol. (It was either that or exercise and I wasn't about to drag my lazy butt off the sofa!) I made a bunch of hats a scarves for my kids and they actually wore them without any threats from me! But I could never make them the same way twice because I have absolutely no idea what the hell I'm doing :)

1. Use the scarf as a murder weapon in a crime story (strangled by knits!)

3. Use knitting & crochet prowess (or lack of) as the backstory in a crafty whodunit... The World Knitting Championships! The fame, the glory for the winning... the accolates... Some Knitting Chapionship contestants will do anything to win!

4. Use knitting as the metaphor for a coming of age novel.

5. Use crocheting as the theme in a Senior Citizen Chick Lit novel.

6. Use knitting failure as the seed for a dark psychological thriller....

Cheers, Jill
www.jilledmondson.com
"Blood and Groom" is now in stores!

I love crocheting hats. That is one of the teeny things no one (until now) knows about me. But if I have any type of writing to work on, my crochet hook gathers dust. It is so dusty right now I don't even know where it is.

Write away, ladies. What an awesome passion.

I signed up for a knitting class that starts in January. I'm scared now. If you can't do it, I'm in a heap of trouble...

Want to know about my crocheting skills? I looked at that picture and thought, "Not bad." Clearly, my foray into crocheting failed even more epically than yours!

At least you can say you were well rounded enough to try. Besides writing is so much more fun. Right? Right!

I can't believe you still have it! If I ever run across my attempt at knitting I'll email it to you. It was just a blob. I'm not sure where I was going with it, where it started or where it would end. It just *was*. And then it wasn't. I hated knitting. Now I just beg my 9/10 crafty friends to knit things for me.

You need to get back to writing. Before you decide you to try your hand at sweatshirt appliques with puffy paint outlines.

Knitting? Awesome. I have never learned but someone knitted an amazing baby sweater for MiniMac and I couldnt believe how beautiful it was.

Hell yeah is right! And I love the fact that you have even tried to knit! haha!

Don't ask. But don't mess with me in a dark alley either :-)

Hilarious! That is definitely me. Fabric of any type and I, well, we just don't get along. I don't sew. I can do buttons, but I figure that's because they're plastic and the thread has minor pity for me. Anything else? Don't make me laugh! Or at least, I won't be making anyone else laugh...

*is bemused by high rating for knitting/crochet*

I knit. I can crochet, but it takes ages and isn't as good as knitting.

Once you know how, knitting really isn't complicated. I wouldn't give it that high a rating...but I guess it might seem that way at first.

girl - you dont want to see what ive been doing. YOu should see my garage!

I prefer cross-stitching, but learning to knit is on my to-do list, right behind painting a wall-sized mural for my son. Yeah--too many creative things to do. I'm glad you took up writing. :]

I am secretly jealous of your level 2 crocheting ability. You did get good some suggestions from you last post!! I have three suitcases that need unpacking staring at me right now. How many more days do you think we can live out of them?

At least your knitting is better than mine. We might have to swap knitting horror stories. =)

Ummm...maybe you could use it as a homemade book cover. I can't knit either! Crocheting is much easier...hey I meant to make that scarf curvy!
Kerri

I've crocheted a blanket before and started two others that have yet to be completed. One was supposed to be finished by the time my hubby and I married.

That was two years ago. It's still not done :P Every time I've tried to start up again, the cat tries to eat the yarn and then the dog tries to eat it because he can't stand seeing the cat have something that he doesn't have. Whatever progress I make ends up unraveling because of those animals. :P

I honestly don't think that it looks that bad. At least you found writing! :)

What a lovely shade of blue you chose. You at least created a nice blanket for a Barbie. AND you gave up crocheting to write a book, a book that's being published. That rocks!

You know, I actually think crocheting is way harder than knitting. I knit my first scarf this summer and am halfway through another one. Even though I haven't touched it since August.

Anyway, I love that you find something you loved doing. And that it wasn't knitting, because I don't know that I would buy that scarf. No offense.

Yeah, I'm definitely not crafty enough for knitting. That would be like a recipe for disaster-- testing the limits of my temper while I'm in possession of two pointy sticks and a garotte...

Yeah, I used to do some crocheting. It was torture, and the whole time I was thinking "I hate this. I hate this." and yet I kept doing it.

Thank goodness for something else. ANYTHING else.

In the little picture on my blogger dashboard the scarf looks like blue b00tay shorts! I'm glad you're writing again!!!! ;)

AWESOME! I did warn you that crocheting might be easier.

If you lived closer than OHIO, I could give you a lesson!

(Thanks for the linky love. :D)

Hilarious! Looks like you got a good start on the scarf (further than I could have ever gotten!) ... but made FAR more progress on the book ... so stick with those!

Yeah, stick with the writing! My knitting is about the same. Horror!

I can't judge because me and sewing/knitting/crocheting/anything involving needles (including shots) just do not mix. No really, I can't even sew a button. Actually, I can't even tie a knot. So I'm still very impressed with the scarf-its WAY better than I could do. Though I have to say, I definitely wouldn't recommend wearing it. :)

My mom tried to teach me to knit by having me make Barbie clothes - basically tubes with holes for various body parts. Hideous, hideous things. Still makes me shudder.

I consider myself pretty dang crafty, and even I balk at knitting. I made a few shoddy scarves and tossed in my needles as well.

You should totally turn that scarf into a dishrag or a Barbie throw rug or SOMETHING. Don't let all of that hard work go to waste!

There was an auction recently where one of the prizes was a scarf knitted by Debbie Macomber. Who knows? That scarf may be a coveted item one day.

We have to have something to besides write, right? But it's nice to have someone to pull you back on track though. Someone needs to give me "the talk".

My grandmother used to crochet the most amazing blankets. I asked her to teach me how to do it once and of course she was thrilled to show me. But after a few hours, she told me to forget it. Yeah, that's how bad I was:)

"Knitting" words comes far easier to me than regular knitting! First of all there's the delete key, and it's just so damn to delete/unpick bad knitting...

We have an award for you!!
http://firstnovelsclub.blogspot.com/2009/12/blog-awards-and-come-along-contest.html

Then I realized that I can buy my scarves.

K-Mart double woven whatever the hell has nothing on the delectable Burberry I just got in pink, cranberry, cream and tan.

OMG, when I first opened the blog I thought you knitted a pair of hot pants. Wow, where's my mind this morning? And hey, don't knock the knitting. It works for some writers. A few. Okay, I know of one. And she's also pregnant. Yeah, I'm gonna go drink my coffee now.

my mom crochets like she came from the womb with a needle. i tried once and got so frustrated i couldn't handle it. at least you have something to show for your attempt :)