Book Review: SOME GIRLS ARE by Courtney Summers 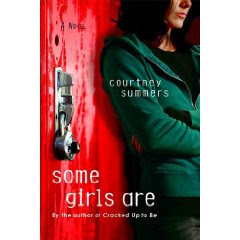 I brought SOME GIRLS ARE with me on the plane to Chicago this weekend thinking that I'd read a few chapters on my way home and then take a little nap on the plane. Let's just say the nap never happened.
Here's the book description from Amazon:
Climbing to the top of the social ladder is hard--falling from it is even harder. Regina Afton used to be a member of the Fearsome Fivesome, an all-girl clique both feared and revered by the students at Hallowell High... until vicious rumors about her and her best friend's boyfriend start going around. Now Regina's been "frozen out" and her ex-best friends are out for revenge. If Regina was guilty, it would be one thing, but the rumors are far from the terrifying truth and the bullying is getting more intense by the day. She takes solace in the company of Michael Hayden, a misfit with a tragic past who she herself used to bully. Friendship doesn't come easily for these onetime enemies, and as Regina works hard to make amends for her past, she realizes Michael could be more than just a friend... if threats from the Fearsome Foursome don't break them both first.
This book was riveting. I literally could not put it down. Regina is an intense character and easily could have been unlikeable or difficult to relate to in the hands of a lesser writer. But Summers nails her voice and I found myself cheering for Regina as I watched her grow and develop throughout the course of the story. The writing is superb and the pacing is fantastic.
Go pick up your copy today. You won't regret it.
at January 28, 2010

Daisy sang Courtney's praises to me a few weeks ago (she is like the best book recommender ever), so I bought this book and "Cracked Up To Be" the other day, and I can't wait to read them. They are next on my list. : )

Thanks for the review!!! Happy Thursday!

I read this in two days....I could not stop. So good! I passed it on to one of my students, she read it over the weekend and now everyone is fighting for it. We bought five more copies for the library at my school. Summer's books just pull you through at a break neck speed and you can't stop reading it.

Never heard of it and since I was one of those girls who ate cliques for breakfast and got talked about as if I were some Amazonian freakazoid because I had a twin and didn't need other friends, I would probably have never picked this book up.

But now I'm going to head right on over to Amazon... Thanks ladies! :D

Yes!!! I love a good book. Especially one that can't be put down. Thanks!

Melissa (i swim for oceans) said...

I heard this book was excellent! I can't wait to read it :)

P.S. Your interview is up!

Yep! I finished this 2 days ago. I would have liked a little more in the ending...but I could not stop reading. OMG girls are mean!

Sounds like a great one. I'm always looking for book ideas.

Nice review, I am oddly being turned into a chick-lit aficionado...

sound real good! I love a good book recommendation..saves me time! Thanks!

Oh, I so want to read this. SO. BAD. I've got it on my list, but right now I'm reading everything my library has. You know, money issues. But I will get to this one. I will.

Awesome! Thanks for the recommendation, ladies! :-)

I love Courtney's writing and can't wait to get my hands on this book. :-)

Sounds like a great book! Thanks for the heads up.

Don't you love to find a book that keeps you riveted, even if means losing out on precious sleep?

I'm still trying to find one to live up to The Hunger Games and Catching Fire. Curse Suzanne Collins!

My To Buy list just keeps getting longer and longer!
It sounds great!

I'll read anything Courtney writes! LOVED this book! Have you read Cracked Up To Be? OMG!!

Hadn't heard of this one either. Rachele's comment put me over the edge. On the list. Thanks!

People need to stop gushing about her books because then I'll literally have to stop doing the important things in life and sit down and not get up til they're read! I swear they're at the top of my TBR.

I've used my entire day today reading SHIVER. Guess this book will be next on my list!

Sounds like a very realistic book - so true to life. Can't wait to read it!

I love finding new blogs!!! I found yours reading one of Elana's brilliant posts!!!

This book sounds awesome so I can't wait to pick it up!!!

I've been planning to pick that up. From the sounds of it, I'm going to have to shift that way up on my To Read list. Thanks for the rec.

Oooh, sounds RIGHT up my alley! I am totally going to run over to Powell's tomorrow night and grab a copy :-)

Geez. You'd think this Summers chick could write or something, what with all the gushing I've seen around here. I mean, what's she got that I don't?

I just put SOME GIRLS ARE on my list for B & N. Thanks for the heads up.

So glad you guys loved this book! Courtney is my inspiration and she is the reason I started writing for young adults. Her books blow me away!

Ooh. That sounds fabulous. I'm going to have to make a trip to B&N this weekend, I guess. :) Thanks for the review, ladies!