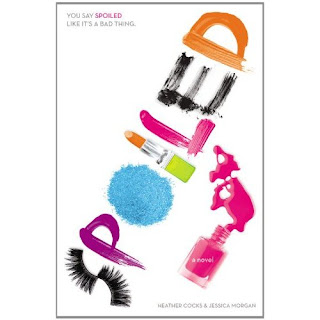 Once upon the time, back when I had a desk job and no kids and an entire lunch hour to kill on the interwebs I discovered blogs. I have no memory of how I found these blogs (Probably I was bored enough to spend my time googling things like "hilariously bad celebrity fashion." Yes, seriously.) but eventually I ended up with a file of 30 or 40 bookmarked blogs that I scanned during boring conference calls. At some point along the way, bloggers became my rock stars. They were funny, entertaining, witty and amazing writers to boot. The Fug Girls were (and are) at the very top of my list of blogstars (see what I did just there?).
I love them. I aspire to be as funny as they are. I want to skin them and wear them as last season's Versace. Ok, maybe not that last part, but The Real Housewives of New Jersey premiers next week and I couldn't resist.
Just when I thought I couldn't love La Femme de Fug any more than I already do they went and wrote a YA book called SPOILED

. My worlds collided and my brain exploded with awesome when Gretchen McNeil sent an ARC my way.
Here's what the back cover has to say:
Sixteen-year-old Molly Dix has just discovered that her biological father is Brick Berlin, world-famous movie star and red-carpet regular. Intrigued (and a little terrified) by her Hollywood lineage, Molly moves to Los Angeles and plunges headfirst into the deep of Beverly Hills celebrity life. Just as Molly thinks her life couldn't get any stranger, she meets Brooke Berlin, her gorgeous, spoiled half sister, who welcomes Molly to la-la land with a smothering dose "sisterly love"...but in this town, nothing is ever what it seems.
Set against a world of Redbull-fuelled stylists, tiny tanned girls, popped-collar guys, and Blackberry-wielding publicists, Spoiled is a sparkling debut from the writers behind the viciously funny celebrity blog GoFugYourself.com
Lila's Take:
I predict SPOILED

will be the book to be seen with on the beach this summer. I mean, Midwestern gal + Hollywood Celebutante in Training ÷ Fug Girls humor = WIN. The characters are engaging, the plot zips right along and nothing is what it seems in Hollyweird. I spent an inordinate amount of time trying to figure out which celebrity the unintentionally hilarious Brick was based on and I adored the many celeb cameos and asides. Molly is relatable and engaging while Brooke is flat out hilarious. But what I loved most about SPOILED

. Pick up your copy June 1st!
Check out what the other Bookinistas are up to this week:
Click here to join The Bookanista Book Club at The Reading Room where you can check out all the books we're buzzing about!

Normally something like this would not be for me, but if it's half as funny as you all are, it might be worth the effort.

I MUST get my hands on this book. Expect me on your doorstep in a few hours.

YES! I've been a Fug fan for years! I saw a mention about this on their blog a couple weeks ago, but didn't know details! Thanks!

Okay, you convinced me! I'm putting this on my TBR! :)

What a fun cover! Because you promise it's funny, it's going on my books-I-want-when-the-self-imposed-book-buying-freeze-is-over list.

I want this book. I love the Fug Girls, and I'm so happy (and relieved) to hear that it's actually really good! (Funny in a blog doesn't always equal funny in fiction. I'm glad to know it does in this case!)

How did I not know about Go Fug Yourself??? Now, I feel like a shut in for not following their blog.

If they are half as hilarious as you guys, I have to be a part of it :).

I need to spend more time on their blog. The few things I've read are freaking hilarious. The book sounds like a great read as well. Especially because of this: "It's a book about sisters and friendship and figuring out that people aren't always what they seem." Yes! This is what I like to see. Love it. Great review!

Sounds like a fun read! Love the cover too :)