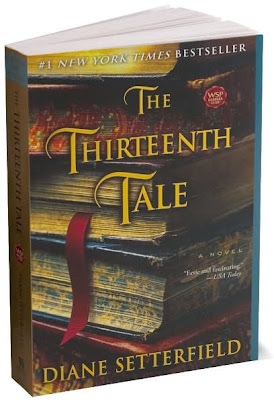 This book was published in 2006, but we are just now reading it for my book club (we're a little behind). I'm sure many of you have already read it, but I'll be interested to see what you thought. It looks like this book earns mixed reviews.
The Gist: Biographer Margaret Lea receives a letter from famous author Vida Winter who is on her death bed. Throughout her career, Vida has written many famous stories, but is most famous for her collection of twelve. Whenever anyone interviewed Vida, she would make up elaborate stories about her childhood/life. She never told the truth. Now, about to die, she calls upon Margaret to tell the true story of her life--the thirteenth tale. The book flips between Margaret's experiences with Vida as she tells the story, Vida's experiences as she researches information in the story and Vida's actual story.
Bottom Line: I couldn't put the book down, after getting into it. It took a little while though. I think the writing is beautiful. My favorite line was when Setterfield described a character who was not at all attractive but had a very beautiful laugh. "But she had that laugh, and the sound of it was so beautiful that when you heard it, it was as if your eyes saw her through your ears and she was transformed." I love that. I was a little annoyed because I couldn't figure out the time period. Vida's story was a bit of a mystery, which I liked, so I was always trying to determine who fit where. It mostly comes together at the end (Setterfield leaves a few things left open for the reader to assume on their own), but some parts of the ending seemed a little too neatly/conveniently wrapped up. But the reality is that I skipped all of my shows (well, taped them) to read this book--yes, even Gossip Girl. So, according to our rating system, that would fall under the 4 Star rating. And I think it deserves it. I really enjoyed the book. Can't wait to hear what you thought/think!
4/4 Stars. I skipped Gossip Girl to keep reading (but will watch ASAP).
Our Ever-So-Sophisticated Rating System:
4 Stars = I skipped Gossip Girl to keep reading.
3 Stars = I watched Gossip Girl, but I skipped Bravo reality TV to read.
2 Stars = If the only thing left on my TiVo was the Hills, I'd read this.
1 Star = I'd actually rather watch the Hills than read this book.
at May 14, 2009

How am I ever going to find the time to read all of these amazing books I've been compiling on my list?? But it sounds great, so I guess I'll have to add it.

It sounds like a great read! I'll have to look out for it.

I couldn't finish this book. I'm just not a fan of literary fiction. I really did try to get into it, but it was just too -- I don't even know. Not for me, I guess.

Sounds great...Jeez, my summer reading list sure is getting LONG!

*drools over the writing*

Thanks for the review.