The Bookinistas: NIGHTSHADE CITY by Hilary Wagner (comment and win!) 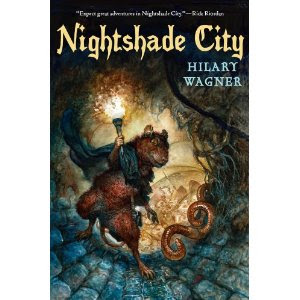 Hilary Wagner is yet another innocent victim of LiLa's cyberstalking. We've been following Hilary's rise to superstardom since she was looking for an agent. And now her debut middle grade novel, NIGHTSHADE CITY

, is being being blurbed by Rick Riordan. Wow.

"Fans of Redwall and the Warriors series will love this heroic tale of good versus evil in a subterranean society of rats."
--Rick Riordan, author of the Percy Jackson and the Olympians series

Here's what the cover copy has to say:
Deep beneath a modern metropolis lies the Catacombs, the kingdom of remarkable rats of superior intellect. Juniper and his maverick band of rebel rats have been plotting ever since the Bloody Coup turned the Catacombs, a once-peaceful democracy, into a brutal dictatorship ruled by decadent High Minister Killdeer and his vicious henchman, Billycan, a former lab rat with a fondness for butchery. When three young orphan rats--brothers Vincent and Victor and a clever female named Clover--flee the Catacombs in mortal peril and join forces with the rebels, it proves to be the spark that ignites the long-awaited battle to overthrow their oppressors and create a new city--Nightshade City. View the trailer on the Nightshade City website! NightshadeCity.com


Lila's Take:
First cats and now rats! Okay, so it's not every day that you come across such a unique premise in a book. NIGHTSHADE CITY is fresh and different and has classic written all over it. Even if rats aren't your thing, give this book a shot. Hilary is an incredible writer and her rats are relatable to the point where you end up falling in love with the little guys. At its heart, NIGHTSHADE CITY

is a book about the battle between good and evil and the story is one that children and adults of all ages will enjoy.


Because Hilary is amazing, she agreed to stop by to answer our usual (random) questions:

1. Tell us about your book in 140 characters or less.
Eleven years after the corrupt Killdeer takes over the Catacombs, three young rats, along w/a group of rebels, fight to reclaim their freedom.


2. Where did you get the idea for NIGHTSHADE CITY (as the official idea whores, we have a vested interest here.)
I better not see any Lisa & Laura rat books! Ha, ha! My agent uses the word "organic" a lot and I'd have to say that's how NIGHTSHADE CITY

came to be. It was very organic. The book started out extremely different. It was supposed to be something short and sweet for my kids, nothing I ever intended on getting published and--well--here I am today! I wanted a story that was at times dark, but also redemptive. Redemption is very important to me in my writing. As is humor--you can never get too much of that and gosh darn it, rats can be funny!


3. Someone has a pair of scissors to your head (oooh, SCARY!) and you have to choose: Awesome title or gorgeous book cover?
Gorgeous cover! I'm a visual artist and I'm also one of those suckers for a great cover. I've bought many a book based on the cover artwork.


4. When did you know you had to be a writer?
I suppose I knew the day I almost got into what could have been a bad car accident. It was back when I was writing Nightshade City

. I live in Chicago, so a long highway commute to and from work. During my daily drive, I'd think about the book, plotting it in my head, etc., always with a pen and notebook in the passenger seat. Needless to say, I had a breakthrough moment in the car, which had to be written down. Stupidly, I almost ended up in the backseat of some poor guy's Honda! Thankfully, I had good breaks! I risked my life (and possibly Honda guy's) over my book! After that, it was pretty clear in my mind that I was bound to be a writer for life! Oh, and don't worry, no more writing in the car--ever!


5. Twizzlers or M&Ms
Oh, that is just not a fair question! On first grab, I'd go for the M&Ms (dying to try the new pretzel ones, btw). After all that chocolate, you need something light and refreshing, so that's when I'd go for the Twizzlers! They make fun straws too! ;)

:
OK, so after all of that we know you're DYING to read NIGHTSHADE CITY

and lucky for you we're giving away our gorgeous hardcover to one lucky reader. Leave a comment before midnight tonight and we'll announce the winner in our post tomorrow.

Here's what the other Bookanistas are up to this week:

Christine Fonseca is celebrating THE DUFF
Elana Johnson is raving about FIRELIGHT
Shelli Johannes Wells is giving us a preview of DESIRES
Shannon Messenger is loving THE MOCKINGBIRDS
Carolina Valdez Miller is gushing about THE UNIDENTIFIED
Scott Tracey is ravenous about HUNGER
at September 16, 2010

I reallllly want to read this one. Such a unique premise. Hilary is such a kind and generous person, too! Thanks everyone for the review and the contest!

Sounds interesting. I keep promising myself to get back into reading MG. Maybe I'll want to write it one day.

Okay you've sold me. I've heard such great things about this book. I'm officially adding it to my list!

Well first of all Hilary is awesome. She is very kind and also really good and quick about responding to correspondence from adoring stalkers - er, fans, plus she shared her query for Nightshade City on my blog, which blew my world apart.

I would enter the contest but my copy of Nightshade City is already on the way from Amazon. Thanks LiLa!

GREAT! I've been wondering about this one! Watership Down is one of my favorite books, so bring it, RATS! ;--)

I loved this book - and it totally reminded me of Watership Down as I read it!

Pick me! Pick me!

I would love to win this book! Who would have thought something so different would be so intriguing! Props to Hilary for catching our attention!!

I finally joined Teen Fire! Super stoked and signed up for your ARC giveaway as well :)

Can't wait to read about your rats!

This seems like one of the more unique books coming out this fall. I myself cannot wait to read it!

Wonderful interview, ladies! And Hilary, great story about the near-accident (I mean, scary, but still - that is SO something I would do.)

Oh, I love a writer that will work in both the M&Ms and the Twizzlers. Girl after my own heart. So glad the writing in the car worked out in the end, but talk about scary.

Since the first day I started blogging this book has been on my radar and Hilary was one of my earliest followers and I knew I had made it since a cool debut author was following me.

I have to read this! Haven't read anything with good animals since Redwall...

Rats are awesome! So, I was so excited to hear about this book. I'd love to be entered into the drawing. cherie.reich(at)gmail(dot)com.

Congrats on your success, Hilary!

Good vs. evil? Redemption? Rat humor? Yes, please sign me up to win.

The more I hear about this the better it sounds! I was THIS close to buying it yesterday in fact, for my seven-year-old nephew who just had a serious-ish injury and needs a great read. To Hilary, or anyone who's read it--too dark for 7? Or should I just buy it for myself for now? :)

L&L, you two are the coolest ladies E-VER! Thanks so much for having me on your blog! Your questions cracked me up and I cannot stop thinking about chocolate now--thanks a lot! ;)

Faith, to answer your question, it has a few moments that are a bit violent, "fur flying" as Booklist says, but nothing that I don't think a 7 year old couldn't handle! My son is 7 and he loves it! Well...he better! :)

Thanks Lisa and Laura and everyone! October 1st is the official release so we're all very excited here in Chicago!

So glad to see Hilary getting the recognition she deserves.

No need to enter me in the contest, I've already ordered from Amazon and can't wait to read it!

Hilary is one of my favorite bloggers of all time and I wish her all the luck with her book. (though she won't need much)

Oh that book sounds fabulous. I need to pick it up for my 9 year old (um, well, she can get in line)!

Thanks for sharing it!

Nightshade City has been on my wishlist for a while and it sounds amazing! I would soooo love to read it. Having never read Watership Down, for me, the premise kind of sorta reminds me of Mrs. Frisby and the Rats of NIMH. Maybie it's just me. XD

Anyway, thanks for the giveaway! Hope I win. :D

I've been interested in reading this book ever since I began following Hilary's blog. I hope I win.

I too want to read this book (and try the new M&M pretzels).

I too want to read this book (and try the new M&M pretzels).

This would be awesome. Looks like a fantastic read.

I've been wanting to read this one. Hope I win :)

I'd love to play please!

I would like to read this, especially after your interview...so fun!

Great interview Hilary. I can't wait to read your book.

Pick me, pick me! I LOVE rats!

Thank goodness for good breaks/brakes!!! I look forward to reading the book. Would it help if I told you I was kind to my rat in Psych 103 at U of I a LOOOONG time ago.

I am always amazed at people who can write fantasy settings, characters and such. Me, I use real settings like Boston and Southern California. I have enough trouble thinking up people names, let alone creature names and such. Best wishes for your success.

Please enter me...I already have the book, but I know an almost 11 year old blogger that would REALLY love a copy of NIGHTSHADE CITY.

Hilary, as I told MZ, I am in awe of your book and your skills! I bought the book because I think you are adorable, but I'm reading it because your words are epically beautiful! Your descriptions are fantastic! Your characterizations are awesome! I have a love hate relastionship with with Killdeer and Billycan...AWESOME WRITING!!!!!

Enjoyed your humor and Hillary's great answers. Can't wait to read Nightshade City. It sounds awesome. As a former teacher I can see it being read in classrooms across the country.

Please enter me to win a copy of Hillary's book.
Thank you. :)