NYC Prep premiered this week and it did not disappoint. The kids on this show are so affected that it was difficult to watch at times. It was one of those cringe worthy shows where you almost want to cover your eyes because you're so embarrassed on behalf of the people on screen.

Naturally, I managed to watch the entire 60 minutes, plus the 30 minute preview special.

For those of you who are unfamiliar with the term D-Bag (aka Douchebag) I give you Wickipedia:

"Douchebag, or simply douche, is considered to be a pejorative term in North America. In other English speaking countries the term is not well known. The slang usage of the term dates back to the 1960s. The term implies a variety of negative qualities, specifically arrogance and engaging in obnoxious and/or irritating actions without malicious intent. It is generally used for males only."

Yes, it's a little crass, but it's the perfect way to describe those guys that think they're too cool for school when they're actually total poseurs. Famous d-bags include men like Slade Smiley, Jesse Metcalfe, Chad Michael Murray and John Mayer. A true D-Bag takes himself extraordinarilty seriously and can often be seen wearing marves (man scarves) and mandals (man sandals).

Exhibit A: Watch a D-Bag in action as PC uses the term "gal friends" without a hint of irony.

Please see below for your official ranking on the D-Bag-O-Meter (patent pending). As you can see, George is the quintessential non-douche, while Spencer is as douchy as they come.

You, dear PC, have just earned yourself a "serious d-bag" rating with your performance in the NYC Prep premier. 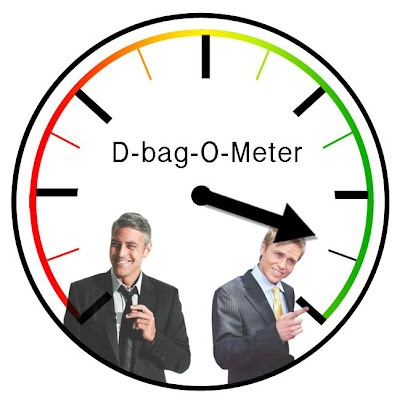 ooohhh my goodness! I couldn't agree more! PC was ridiculously painful to watch, how can you be so entirely full of yourself at such a young age?? between he and his pseudo girlfriend, Jessie (who over reacted terribly about the bottle o water incident, give.me.a.break!) it was a definite cover your eyes and cringe fest. Also, the mention of Slade Smiley made me lol. thanks!

Steph - You totally get extra credit for even knowing who Slade Smiley is! When I added his name to the post I was sure that I was going to get all kinds of comments asking who the heck he is, in fact, I probably still will.

I have to say that he is the ultimate d-bag. Bravo sure can pick 'em.

You realize that by using the word douche in this post you are opening yourselves up to a whole new world of keyword search possibilities.

I agree with Tess, my sad little mind is already working those search options!

And, I just have to say, kudos to you for making George the gold standard for non-douches everywhere. Bravo! He is definitely the anti-PC, and dare I say, lick-a-licious!

BAHAHAHAHAH! Okay... I need to put your D-Bag O Meter on my wall :D!

I can use it when I'm watching "Bachelorette" tonight.

Tess/Kimberly - It's no coincidence that we did the Google Me This Contest before we unleashed the power of the d-bag-o-meter.

Kimberly - I heart George. He really is as un-douchy as they come. Thank god there are men like him to counteract the d-bags of the world.

Rebecca - I haven't kept up with the Bachelorette but I have to believe that cast is littered with d-bags. Who else goes on national television to compete for the love of a previously scorned woman??? Does anyone aside from a d-bag think that's a good idea?

BAHAHA. I don't watch these shows because they only make me frustrated at things I have no control over.

Like Jon and Kate Plus 8. It's just...degrading to watch. I want to punch Kate Gosselin in the face. Both of them, really, but Kate just comes across as an attention-hungry child user.

Oh my goodness, you never fail to make me laugh!

How is it that things are so dramatic when you are 16 - 23? Between this and the Real World (the blinders have been pulled away) I want to stab myself in the eyeball.

Ok, so I have an argument about George. I know he's "not douchy," but he has a rep for dating cocktail waitresses and then dropping them after a year. I think he could be an asshole boyfriend. It's like the older guy that only dates strippers and girls with fake ta-tas and has the daddy complex. He wants to fix them and within twelve mos he's moved on.

I'm watching you, George Clooney. I'm on to your game.

Icy - How can you resist? I just can't quit bad reality tv, no matter how hard I try.

Kelly - Music to our ears!

LMJ - Of course George is seducing cocktail waitresses and then leaving them at the proverbial alter after a year(ish) of dating. I think it's all part of his old school charm. You have to admit, that they just don't make movie stars like George anymore. He reminds me of that Rock Hudson...uh...wait...I mean...whatever. The bottom line is that George is George.

And, yes, we should ALL keep a close eye on him.

One more thing LMJ...did you watch the Cancun premier!? Good god. This is the first season since Vegas where I'm concerned about all of the cast members surviving the season.

And you meant that whole stabbing yourself in the eyeball as a good thing, right? As in, that show was so entertaining I stabbed out BOTH of my eyeballs. Awesome.

When the term "douchebag" comes to my mind, one image pops up: Spencer. Every time. Hands down. Makes my spine ache from cringing.

Props to Laura on the photoshopping!

I'm with LMJ--George is hot and totally swoonworthy, but as a boyfriend? He may just slide a little further over on the d-bag-o-meter (LiLa patent pending). Like, close enough to wake and give a shout out to Spence, but maybe not shake hands.

I had to watch RR Cancun with a blanket in my hand, at the ready. I need to be able to cover my face when they totally embarrass me. If they don't end up with a super strain of chlamydia then someone is going home. Just wait until Spring Break. Ohmygoodness, I just can't stand it.

Have you even seen the Bachelorette? Now that makes me want to stab out BOTH my eyeballs.

OK, Clooney haters, who is the ultimate non-douche then?? Paul Newman? I'd rather have someone who's in their prime now though. Non-douches are pretty hard to come by in Hollywood at this point. Hmm...Will Smith might work. He's a total non-douche.

I'm not a Clooney-hater, I just think he's a little douchey. :)

I'm not sure there is a Hollywood guy w/o some level of douchiness in him (by the by, I keep almost typing "doughiness" instead), but I wouldn't argue with Will Smith at the low end. Love him.

How about ... Clive Owen? Or Gerard Butler? Are they d-bags? Because I super-big heart them.

Oh Gerard! How could I have forgotten Gerard!? Hmm...we might need to do some reconfiguring on the d-bag-o-meter.

So I finally got around to watching NYC Prep, and I have to agree. PC = pretty serious d-bag. Pretty heavy emulation of Mr. Chuck Bass himself. But I've gotta say, if I had to hang out with either PC or Sebastian ... I'd pick the d-bag over that little manwhore anyday.