Behind the Cover: WE HEAR THE DEAD

Today we'd like to welcome the fabulous Dianne Salerni whose debut novel WE HEAR THE DEAD will be published by Sourcebooks Fire this May.

And based on this blurb it's clear why the book is generating so much buzz:
Maggie & Kate Fox didn’t mean to create a new religion. It started out as a harmless prank. But soon enough, spiritualism was the fastest growing movement of the nineteenth century, and they were trapped in a life of deceit.
Lucky for us, Dianne agreed to write a guest blog about what it was like to see the cover for WE HEAR THE DEAD for the first time. Join us as we live vicariously through her. 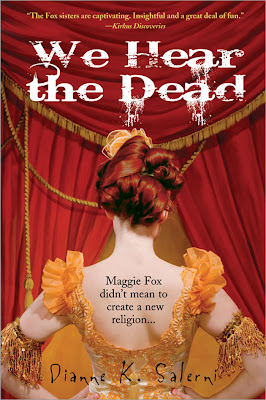 So … Lisa and Laura asked me: “What did it feel like to finally see your book cover from Sourcebooks?” I had to cast my mind back to my original reaction when I saw the cover last summer. As near as I can recall, I jumped up and ran excited circles around the living room – kind of like our dog. Embarrassing, huh?

I’d envisioned various covers, of course. Who wouldn’t? But I have to say this cover was unlike anything I’d ever imagined. I was struck by the bright colors and the confident, perky stance of the girl in the illustration, which contrasted sharply with the title “We Hear the Dead” and the creepy font chosen by the designers. Sourcebooks selected a title that hinted at spooks and horror, but coupled it with a cover which emphasized the performance aspect of the whole story. Looking at this cover, I think readers will know immediately that Maggie Fox is bamboozling her audience. And because the viewer is positioned behind her on the stage, readers will expect to be “in on the secret.”

I should mention that credit for the title goes to one of my fifth grade students. My editor and I were bouncing around various ideas for a title (and the design crew kept throwing them back). I mentioned the problem to my class, and one student, Emma, suggested “We Can Hear the Dead.” I threw that one into the mix in the next batch of titles I sent to my editor, and wouldn’t you know – they loved it! Not only is Emma getting a free, signed copy of the book (as soon as I get some), but I think she might just have a future in publishing!

Beautiful! The color really pops. I'd pick it up at Borders, and that is really the test of a good cover, no?

Congrats, Diane! I'll be looking for your book come May!

I LOVE this cover and the book sounds very cool. Thanks for sharing!

Love the cover, and love that one of her students came up with the title. It sounds like a great story. Can't wait to read it!

The color is great and I love her dress and the way her hair is done! Great cover! I'm guilty, covers draw me in.

LiLa: Have you seen the trailer for Rules for Attraction (Simone Elkeles) yet? It's on my blog. I'm not into book trailers but this one's amazing!

Gorgeous cover, and the story sounds like something I'd love. Congrats!

Thanks for telling us all about it!

Love the hook...didn't mean to create a religion.

I love that cover - it's gorgeous! Thanks for sharing, LiLa. :-)

That cover is pretty!

I LOVE THAT COVER! I must have cover ennvy. Everyone's covers that I see evoke this visceral avarice which I seem completely unable to control. And I become more and more sure that the hold up with mine is that it's really bad and they can't figure out how to fix it. (I wake screaming from the nightmares.) O.O

Love the cover, and I love that one of Dianne's students came up with the title!

The whole premise of the story is what grabs me. I think I would read anything with that title.lol

I love the cover. The colors make it pop. Plus the title is amazing too!

Oh my gosh, my cover is the one thing I'm dying -- DYING -- to see. I just know it can make or break a book, and well, I'm DYING to see mine! And not that I even have that much to look forward to, but still.

Love this cover. This book sounds really interesting. We have to wait until May? Sigh.

p.s. How cool is it that Diane commented on my writing over at Teen Fire?!?!?

This is a great example of a situation in which the cover alone makes me want to read the book.

I love that one of the students is responsible for the title - awesome :)

Gorgeous cover! Can't wait to read the book...I'd pick it up based on the cover alone :)

Great cover. Great story behind the title. Wishing you great luck when that stack hits the bookstores.