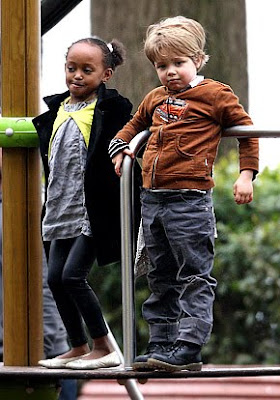 For those of you who are on a first-name basis with the Jolie-Pitt brood, please check out this recent "news" item on UsMagazine.com, Which Jolie-Pitt Has the Best Style: Shiloh or Zahara?

1. The writer who pitched and then wrote this idea pretty much reserved themselves a spot in Hades. I mean these kids are three and four years old! Do you really need to be pitting them against each other like mini-CW starlets?

2. Who actually takes the time to comment on "news" articles like this? Okay, so I'm totally guilty of serial blog commenting, but at least that's reserved for people I sort of know. I can't imagine having something so burning to say about the Jolie-Pitt kids that I'd actually feel compelled to share my thoughts with fellow US Magazine junkies.

Which brings me to my third and final point....

3. The comments are BY FAR the most entertaining part of this whole affair. Some of our favorites:

Well, there's your weekly dose of pop culture. Personally, as writers, we're SUPER excited for the inevitable tell-all books that will be published by these two in twenty years. I'll be first in line to pick up a copy of CONFUSED: MY LIFE DRESSED AS A SMALL PREPUBESCENT BOY by Shiloh Jolie-Pitt, although I'll be even more excited to read DADDY DEAREST: MY LIFE WITH A MAN WHO HATED WIRE HANGERS MORE THAN MY MOTHER HATED MANISTON by Zahara Jolie-Pitt.
Good times.

*Please note this post may be considered offensive if you are sensitive to tomboy preschoolers, anti-gay senators or if you are a frequent Abercrombie and Fitch shopper and a card carrying member of Team (M)Aniston.
at April 27, 2010

OMGosh...that's hilarious. People really write that stuff. Thanks for lifting my spirits this morning and highlighting two adorable kids. ";-)

I must say, I was laughing out loud at the very end - including the appropriate disclaimer. HA!

You gals are funny. Did you get my email?

LOL. That is so funny. You would have to wonder what top-notch writer cranked out an article like that.

As I was up til 1am editing, I'm forever grateful to you both for starting my morning with a laugh - hilarious!

AHAHAHAHAH!!!1
This post was SO funny!
ahhh, good times.

I've been thinking about this a lot lately. Like losing sleep (not really). I had to explain to my sister the other day that Shiloh was indeed a little girl. She was confused, for good reason.

Honestly, I'm more than ok with the tomboy front. Looks to me like Shiloh really loves her dad and her brothers and wants to mimic their style. The haircut might be pushing it a little though. Merely because it does tip the scale so far in the boy direction for the casual observer. Otherwise, so what?

As for the Maniston lover... he does realize that Zahara isn't actually Angelina's, like, biological kid, right? He seems to be confused on this point. Her beauty doesn't really have squat to do with Angelina's. That's the way genetics work, genius.

Also, love the leggings. Is it just me or are kids clothes FAR cuter than grown-ups? Like in Target, I really really just want to shop in the girls section. SO MUCH CUTER.

Really 4 year olds? It's like a battle royal at the local park. Don't gossip magazines have better to do like gossip about Kate & Jon Gosselin? I mean we all know that news *insert eyes a rolling here* Oh my...

But I am dying over the comments those really are priceless.

Thanks for the laugh!

I hadn't heard about this because I've been living in a bubble lately, but thanks for the laugh.

Hilarious! Thanks for the giggle this morning. Glad I am not famous or people would be going on about my youngest with his chia pet hair

That was probably the funniest blog I've read in a month. Thanks for the laugh ladies.

Um, can I just say I think they're both adorable, like four year olds are supposed to be? I don't know what it is, but I see lOTS of kids dressed up like teens here, not necessarily innapropriately (though sometimes... *shudder*) but with the layers, or the dyed hair, and so on... and it's just weird to me!
I mean, was I the only four year old whose mom dressed me in only pink dresses, curled my hair every Sunday, and tried desperately to keep me from digging in the dirt with my brothers? No?
:D
Hilarious post, by the way. I loved your extra comments!

I'm pretty sure when I was Shiloh's age, it was a battle to keep me from being naked, so kudos to Brad for getting her in actual clothes. :-)

My brain hurts reading this kind of CRAP. But your commentary helped me through. Hilarious!

I don't have an issue with the whole tomboy thing. I know boy moms who've complained about their sons wanting to wear pink and paint their toes every color of the rainbow because they have older sisters. No biggee, I say. And I think Shiloh looks adorable. And anyway, in a couple of years Zahara's going to knock some fashion sense into her.

I'm going to request that you add text to your asterisk at the bottom that this post could be considered offensive to Jennifer Aniston lovers. Don't hate, but I am still broken up about those two. I don't care if Jolie's adopting all of Africa, she's still a home wrecker (crap I need to stop reading gossip blogs...)

After careful and deep thought...I have come up with a few reasons why Shiloh looks like a boy.

1) It was Brad's day to dress his half of the kids.
2) They are trying to disguise her to pass as Brad so they can dodge the papparazzi.
3) Brad fell victim to first child syndrome (where you dress your first born exactly like you until someone makes you stop). And for the record my son does not even remember having pink toenails.
4)They have so many kids, they have actually forgotten Shiloh is a girl.

They are both extremely cute though.

FYI: My blog post today is all about winning the Roecker Extravaganza Package and how great you guys are!!!

Well, I have no idea what you're talking about, but it's still funny. That's talent.

The only thing I got out of this wonderful post was...

Oh and one more thing:

[LiLa commentary: Laura - Who says "gays" in a non-ironic context? Lisa - Bat shit crazy people.] That made me laugh out loud!

LMAO!!! Ah, ladies, thank you for a laughter with tears moment. :-)

For what its worth, I'm Team Shiloh all the way.

But I'm also Team Roecker, so everything works out for the best.

Haha. It's a strange world when two kids are pitted against eachother. The thing they should be worried about is who pushes who first on the swings. lol.

it took me exactly the length of that entire article to realize that shiloh is NOT supposed to look like a boy.

because shiloh is a girl.

i'm so confused by these people and their too-much-time-on-their-hands syndrome.

I agree with sad..and the kids really look sad too..

You two always make me laugh out loud. Those kids don't look great though. Poor Shiloh. I'd opt for the 2nd title, "Daddy Dearest..." So funny.

Oh gosh gotta love how the press over dramatizes everything and I should know. Um, I guess I can kinda be a drama queen. Shhh I will never admit this to the hubby lol!

I scrolled down to try and find the picture of Shiloh - I thought that was just another boy next to Zahara on the playground at first. Ugh... yeah.

Gotta admit I didn't have a clue who the kids were - with or without the title/names. Sad I know!

I can't believe tabloids and people are picking on kids. Wow. Takes all kinds I guess. But we could do without some of them.

I can always count on the two of you to make me laugh out loud! :-)

I can always count on the two of you to make me laugh out loud! :-)

That is so funny.
indian classified site

I love how Brad Pitt and Angelina Jolie let out their children's inner rock stars....

You want to cut your hair short? Sure!

You want to go to the store with a sword on your hip? Sure!

You want to die your hair purple? Sure!

You want a mohawk? Sure!