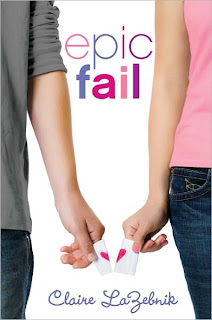 Doesn't this cover just make you happy? And the title? Makes you smile, right? It's no wonder this book is flying off the shelves. And this is all before you've even read the back.

What the back cover has to say:

Will Elise’s love life be an epic win or an epic fail?


At Coral Tree Prep in Los Angeles, who your parents are can make or break you. Case in point:

As the son of Hollywood royalty, Derek Edwards is pretty much prince of the school—not that he deigns to acknowledge many of his loyal subjects.

As the daughter of the new principal, Elise Benton isn’t exactly on everyone’s must-sit-next-to-at-lunch list.

When Elise’s beautiful sister catches the eye of the prince’s best friend, Elise gets to spend a lot of time with Derek, making her the envy of every girl on campus. Except she refuses to fall for any of his rare smiles and instead warms up to his enemy, the surprisingly charming social outcast Webster Grant. But in this hilarious tale of fitting in and flirting, not all snubs are undeserved, not all celebrity brats are bratty, and pride and prejudice can get in the way of true love for only so long.

What LiLa has to say:

It's no secret that our first failed attempt at a book was an update of PRIDE AND PREJUDICE. It was called THE NORTH SHORE and it, my friends, was the most EPIC of fails. So naturally, when we heard that EPIC FAIL alluded to Jane Austen's classic plot, we were intrigued. And when we read it, it was all too clear exactly why our book fell so disastrously short.

For one, Claire Lazebnik created new characters with new traits and new motivations and new conflicts. And what she did so flawlessly was weave an ever-so-satisfying thread of familiarity through each of them so that if you're familiar with the classic, you'll share a secret. And if you're not, well, it doesn't matter. You'll enjoy the characters' stories just as much. Either way, you're going to have a ton of fun reading.

And while the plot again contains that magic thread, it is not a verbatim retelling, but a true update. This is exactly what readers are looking for. A fresh take on a classic plot! Plus, P&P is the love story of all love stories. EPIC FAIL does not disappoint. In our opinion, there aren't enough good love stories to go around and this one fits the bill. Overall it's a very smart, witty and modern take on the classic.

And because Claire is so amazingly awesome, she has offered to make one very lucky reader's day! Leave a comment naming YOUR modern Mr. Darcy and you'll be entered to win a signed copy of EPIC FAIL as well as an EPIC FAIL stress ball to combat all of the stress you'll definitely be feeling when you have to figure out what to wear on a hot date with your real-life Mr. Darcy equivalent.

Check out what the other Bookanistas are up to this week:

Wow, a modern Mr. Darcy - that's not easy since I can only picture Colin Firth (yummy!) when I think of that character. Hmm, I guess it would be Gerard Butler.

That book sounds awewsome!!! I love stories like that. Honestly, Since I loved the movie so much (2005 version) I would have to say Matthew Macfadyen. *swoon*

Great review Lila. Hope you are both doing well <3

My modern day Mr. Darcy would be Jude Law. Without all that cheating business of course.

Oh dear, I'm not sure there is such a thing as a modern day Mr. Darcy. That original Darcy is just so special to me. But I would say that a MDMD character that I love is Alex from PERFECT CHEMISTRY by Simone Elkeles. :o)
britneywyatt[at]gmail[dot]com

Well, I've always thought Bruce Willis was hot. So, if I need an action hero to save me, he's my choice. (I don't care if he's twice my age!)

Someone younger that I think is totally hot and would probably pass on Bruce Willis for is Jake Gyllenhal. Those eyes get me every time.

I guess since the character of Edward Cullen has been refered to as a modern Mr. Darcy I think the actor who played him in the Twilight movies could pull it off. I forget his name Robert Patton or something similar.

Matthew Macfadyen all the way!

Ryan Gosling, because I believe he can do no wrong. Don't lie, you thought he was quirky and awkward until he took his shirt off in Crazy Stupid Love. Who wouldn't go back to old school clothes washing with a washboard like that (badap chhhhhh!)

Oh gosh. Can I say Jem Carstairs from the Infernal Devices trilogy? I mean, I guess it's not really modern... Alright, Gayle Forman's Adam Wilde? I know they're totally different LOL. Thanks! :)

My new modern Mr. Darcy has got to be Noah Shaw from Michelle Hodkin's upcoming The Unbecoming of Mara Dyer. I was lucky enough to read an ARC and fell hard for Noah - who seems rich and standoffish at first, but has a heartfelt core.

Can I vote for Colin Firth, since I loved him in that version of P&P. :)
kathyreadsthis (at) gmail (dot) com

A modern day YA Darcy? Hmm...My vote would be for Varen Nethers -- the standoffish goth kid -- from Nevermore by Kelly Creagh.

If it's just Mr. Darcy in general? Colin Firth. Hands down. :)

Thanks for the book review & for the giveaway!

Thanks for the giveaway!

Ryan Phillippe, especially if I think about his character in Cruel Intentions.

Thanks for the chance :-)

Oh jeez, I'm going to have to agree with Jude Law. He is quite dreamy and his accent makes me swoon.

Colin Firth was wonderful as Mr Darcy *sighs*. I do like Eric Bana, though, especially in the movie Troy! (Move over Orlando Bloom *shakes fist*)
k_anon[at]hotmail[dot]co[dot]uk

Luke Brandon from the Shopaholic series.

If you think about it, he and Becky got off to a strange if not bad start.

They had differing opinions. But Luke is so honourable.

My modern day Mr. Darcy would be Four from the book Divergent...rough and capable on the outside, but melty and sweet on the inside when he's crushing on someone. He often sends the wrong signals to Tris in that book, which Mr. Darcy does quite often in Pride and Prejudice.

I should be waaay too embarrassed to type this, but...Ian Somerhalder.

Ummm, James McAvoy? But that is probably because of Becoming Jane.
What about Ioan Gruffuld from the Horatio Hornblowers?
I like both of those Darcy's
A lot.
More than I should probably admit ;)

I'd have to say Chris Hemsworth..so drool worthy!

Modern Mr. Darcy, hmmmm oh! richard armitage. gorgeous and he was amazing in North and South!

I second whoever said Chris Hemsworth!

Michael Fassbender. He already knows how to play a Regency man (Jane Eyre newest edition), and is British, suave, yummy....care for any more adjectives?
bluej4oxox(at)aim(dot)com

My husband...blah, blah, blah. Okay, down to celebrities. I'm going to go with Ewan McGregor. He can sing. He can act. He rode his freakin' motorcycle across the globe. He can pull off a kilt.

I've been watching Auction Hunters a lot and I think right now it would be Allen Haff - one of the hosts of the show. Luv that guy!

Oh my gosh, this is so hard. I suppose probably Robert Downey Junior?? I love him. *Dreamy sigh*

Awesome giveaway. I can't believe I hadn't heard of this book. I know you mentioned it a while back, but I'm an idiot of epic proportions sometimes.

I would have to say James McAvoy. I love him.... LOOOOOOOVE HIM.

Real life Mr. Darcy? My hubby. Fictional? Shh, don't tell but Peeta. I just have to imagine him at 25.

He can totes pull off the modern Mr. Darcy vibe! :)

my modern day darcy would be ian somerhalder.he's just gorgeous when he plays damon and has the traits of mr.darcy.

My modern Mr. Darcy would be Ben Barnes. He's so dreamy! He could definitely pull it off

Please enter me in the giveaway only if it's international. Thanks!

My Modern Mr. Darcy would be Zac Efron!
Need I say more?

My Mr. Darcy would be Ian Somerhalder.