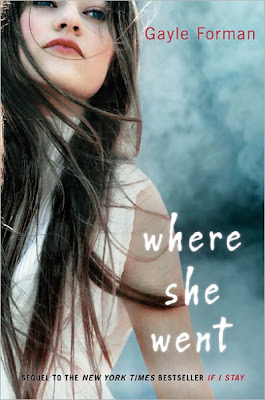 I read IF I STAY during a roundtrip plane ride and I remember crying on the plane and getting strange looks. So, naturally, I couldn't wait to get my hands on WHERE SHE WENT. I mean, Adam's perspective? Yes, please. Not to mention the fact that Gayle Forman is a phenomenal writer. But, I had no idea what was coming. No idea.
What the back cover has to say:
It's been three years since the devastating accident . . . three years since Mia walked out of Adam's life forever.
Now living on opposite coasts, Mia is Juilliard's rising star and Adam is LA tabloid fodder, thanks to his new rock star status and celebrity girlfriend. When Adam gets stuck in New York by himself, chance brings the couple together again, for one last night. As they explore the city that has become Mia's home, Adam and Mia revisit the past and open their hearts to the future - and each other.

Told from Adam's point of view in the spare, lyrical prose that defined If I Stay, Where She Went explores the devastation of grief, the promise of new hope, and the flame of rekindled romance.

This was an Oh. My. God. level book. I know that may sound dramatic, but there is really no other way to put it. I had absolutely zero problem getting on board with Adam's perspective. Well...if I'm being honest, I kind of, sort of forgot it had switched so I read the first two pages a wee bit confused. I blame the cover (and maybe the title?), which are my only hang up. The cover is beautiful, but I wish there was either a boy or something gender neutral like a musical instrument on it, which might have helped set the tone from the very beginning. But NONE OF THAT MATTERS because I'd read this book if it was covered in a brown paper bag.

Okay, back to Adam. From the very first few pages (after I realized he wasn't Mia, that is), you're met with a broken person at complete odds with their deceiving exterior. An outsider might think Adam has it all--he's a rock star, has a beautiful and successful girlfriend and is living his dream. But his inside tells a different story. His bitterness is palpable, but not a turn off because you can understand exactly where it's coming from. You can't blame the guy for being heartbroken. And I swear, I was heartbroken right along with him. That's how talented Gayle Forman is.

And then the journey begins. Adam and Mia are given one night despite the fact that as a reader, you wish it could go on forever. And slowly but surely, Adam's exterior is cracked away throughout the course of this night and his pain comes pouring on out. Mia is left to defend herself and attempt to pick up the pieces. This is the ultimate love story. Even better, the delicate thread of supernatural possibility that I fell in love with in IF I STAY is back and woven ever-so-slightly into the plot and it makes you believe. And believing gives me all sorts of hope. Consequently, it also made me cry like a baby again.


I can't recommend this book highly enough. If you haven't already done so, read IF I STAY and then dive right into WHERE SHE WENT. The two tell completely different stories, but are essentially about love and loss and moving forward. So, so, so, so good.

Check out what the other Bookanistas are up to this week:


Elana Johnson and Scott Tracey find wonder in The Near Witch
Christine Fonseca adores A Scary Scene in a Scary Movie
Corrine Jackson delights in The Unbecoming of Mara Dyer
Stasia Ward Kehoe marvels at My Life, the Theater & Other Tragedies
Veronica Rossi is wild about Wildefire
at August 04, 2011

I enjoyed "If I Stay," but I *loved* "Where She Went." Like you, I was briefly confused by the POV switch -- but I can't blame the cover. I just bought it on my Kindle without bothering to read the copy.

Fantastic book. I love hearing other people say so. :-)

Absolutely loved them both, and hope more authors think about doing this. It was so wonderful to see the story from both perspectives!

I've read and LOVED "If I Stay". I am dying to read "Where She Went", especially now. :) I better look into that.
Lisa ~ YA Literature Lover

Matt, quit it with the sword fights, already! ;) IF I STAY was phenomenal and I actually think a guy would love it, too. Nothing girly about being in a coma and dealing with the death of your parents.

Thanks LiLa for the awesome review. I just bought this book and have been hesitant to taint my love of IF I STAY by reading a sequel. But I'm getting bolder with each good review.

More than anything, I'm intrigued at the idea of a second volume of a series/story told from the opposite gender. It sounds like it was done well, so a bigger plus. I never knew it was the concept behind this book, I've seen it posted a lot around the internetz.

Thanks for the review, I will keep this one in mind!

The most believable boy POV I've ever read, and Where She Went was better than If I Stay hands down. I wrote down all my favorite imagery, that's how good it was! I also cried a little! Probably my favorite book of 2011 so far.

I loved 'If I Stay'- although yes, it did make me cry too but I've heard such great things about the sequel too! I have to check it out!