Book Review: Cracked Up To Be 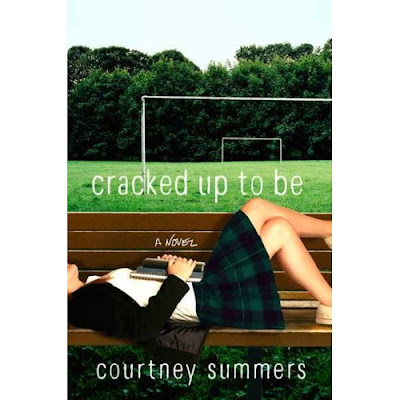 Now that we've had some down time, I've finally had a chance to pick up one of the fifteen books on my shelf waiting to be read. I began Cracked Up to Be, by Courtney Summers on Friday afternoon and was finished by Sunday morning. It is now in Lisa's hands and she's probably wrapping up as we speak.
The Gist: Parker Fadley used to be Perfect with a capital P. That is until something awful happens, something that she's involved with. After that, Parker purposefully falls from grace, pushes everyone she used to care about away and destroys her perfect image. When she meets the new kid in school and accidentally strikes up a friendship with him, she is forced to come to terms with who she was and who she has become.
Bottom Line: When a book starts like this: "Four years, two suicides, one death, one rape, two pregnancies (one abortion), three overdoses, countless drunken antics, pantsings, spilled food, theft, fights, broken limbs, turf wars--every day, a turf war--six months until graduation and no one gets a medal when they get out," how could you put it down? Parker is full of wit and intensity. She made me laugh but also made me frustrated--which I think is exactly what real teenagers have a tendency to do. As I was reading, I wanted Parker to get it together, to pick herself back up, to rise above--I cared. I loved how Summers integrated flashes of the terrible thing--each time you get a little more until the entire awful picture is painted. At that point, the book is woven together and there is an understanding. I loved the writing--it was clever, genuine and realistic. I'm always joking about how the only books I seem to read anymore are YA, but this book, like many others, prove how powerful YA can be. Pick it up...you'll love it.
Thanks for the copy, Joanna!
2.99/4 Stars. (I'd skip most Bravo reality TV, but would probably watch the Real Housewives of NYC Reunion show instead...I know, I know, tough reviewer here.)
Our Ever-So-Sophisticated Rating System:
4 Stars = I skipped Gossip Girl to keep reading.
3 Stars = I watched Gossip Girl, but I skipped Bravo reality TV to read.
2 Stars = If the only thing left on my TiVo was the Hills, I'd read this.
1 Star = I'd actually rather watch the Hills than read this book.
at May 05, 2009

Okay - I am gonna go get this today! I am desperately needing a new read and one smidgen of your review pertained to my new WIP, so yay!

I've heard good things about this one!

So let me ask you this...are you participating in the interactive Real Housewives Virtual Viewing Party tonight (on Twitter)??? I still haven't figured it all out, but I'm intrigued...

What's this you say about an interactive viewing party?? I'm SO in.

What's your user name? How much you want to bet that it will be the two of us and about 500 gay catty gay men? Honestly, I can't think of a better way to spend an evening.

Interesting review - thanks. I love a good book review. But, honestly, I'm more intrigued by the comment section here - you guys crack me up!

I just read 13 Reasons Why--finally. If you haven't read it, go get it. Four stars!

Just ordered:
What I saw and How I lied
and
The Disreputable History of Frankie Landau-Banks

After that, I'll give Cracked Up to Be a shot.

Katie - It's always interesting to read books that have similar elements to what you're writing. Just good to have a handle on what's working in the market, you know?

Kimberly - I dedicate my most recent post to you. You rock.

Tess - So glad that you're enjoying our randomness. We've always managed to keep ourselves entertained and now that the interwebs allow us to expose others to our randomness it's fun to meet people with a similar sense of humor.

Sam - 13 Reasons Why is on my list. I can't wait to read that book! And you'll have to let me know what you think of The Disreputable History. I listened to the entire book on CD in my car. And I liked it, but didn't love it. I wonder if I would have enjoyed it more if I was actually reading it?

Interesting. A little heavy for me, but I liked the premise as you described it. :D

Thanks for the review. It sounds fantastic. And what a great opening line.