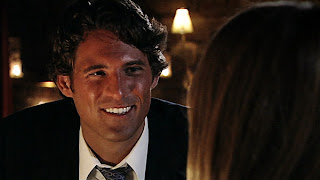 Dear Freddie,
Before we get into this there are a few things you should know about me:
So, here's the deal Freddie, I was suspicious of you and your boycialite (Yeah, I like to invent words too. I guess I should have added that to my list.) brother the second you guys showed up at that barbeque after clearly spending copious amounts of time in a tanning bed. Has there ever been a trustworthy man tanner? I think not.
I grew increasingly concerned when you invited your father to join you and Whitney on your second date without giving her any warning. Your father went on to crush Whitney's dreams of starting her own fashion line (Not cool Fridolin Fackelmayer. Not cool.) as America shifted uncomfortably in their living rooms. Are you hamming it up for the cameras or are you just an emotionally stunted 24-year-old rich boy? It was too early to tell.
It wasn't until Whitney and the gang joined you in the Hamptons that the D-Bag-O-Meter really started beeping. First you wore an unbuttoned tuxedo shirt to the bar and then you freaked out when Whitney kissed your 21-year-old brother. Ok, so maybe that thing about the brother is sort of understandable, but the shirt? Seriously? You are way too tan and you're trying way to hard to be James Bond.
The final straw on the proverbial camel's back was when we found that you have a girlfriend. A girlfriend. Tell me Freddie, did you have to clear it with her before you started fake dating Whitney Port to get on MTV? 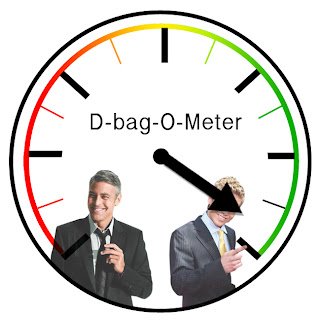 The D-Bag-O-Meter has spoken, Freddie Fackelmayer. Give Spencer a big kiss for me!
Hugs,
Lisa
at November 05, 2009

Congrats on your book deal, gals! So exciting!!!

LOVE the D-Bag-O-Meter! I agree, the Fackelmayer's were a family of D-bags. Did you catch during dinner with the dad that Harry was only 19? He played at 21, but Dad spilled the beans.

Bunch of wanna-be-on-TV slime balls. Good riddance. Though I'd like to catch up with Freddie in 20years to see the effect all that sun has on him. I'm thinking we'll all have the last laugh. :)

OK, I don't watch this show, but I've got to say, isn't Fackelmayer the best d-bag name ever?

haha this is one I haven't watched but your description sold me!!

Haha never watched the show but that still cracked me up. Why does that sound just like that episode of Gilmore Girls when Rory meets Logan's dad and he's all like you suck and will never be a journalist and then Logan's like let's steal a boat and Rory is all F my life? I think I know where the D-bag stole that plotline from!

I wish I knew who this was... May have to google.

You went over my pop culture head with this one, but from the post, I totally agree.

I don't watch The Hills, but this guy sounds like a real D-Bag!

"The D-Bag Meter has spoken!"

I knew the second I saw this episode you girls would have something to say. And the D-bag-o-meter definitely hit it right on this one. Ugh, it was painful to watch!!!

Agreed! If only he would read this post. Major D-Bag, although I still think Spencer is lightyears ahead of Mr. Fackelmayer and everyone else.

Wow, he has a girlfriend? I should be a little bummed that I didn't get to discover and journey through that part of things with Whitney (yes, I just referred to The City as an emotional journey), but I laughed all the way through this post.
Facklemayer.
I bet those boys were teased mercilessly.

Oh man! Every time I read these posts, I think," Damnit! I need to watch this show!!!"

I have no idea who this too tan specimen is???

I wish I watched the show just so I could jeer along with you guys. I like your re-caps either way!

I haven't watched the show either, but boy, I love the D-Bag-o-Meter!

You need a column.

We know you already saw this, but to make it official: This post earned you the title [Hottest] Class Clowns on the First Novels Club blog!