And no, I wasn't the one signing books. That would have been a little premature, don't you think? Yesterday I went to see Jamie Ford speak at an event coordinated by The Learned Owl.
Jamie started things off by talking a little bit about the book itself and his life as a writer. My favorite anecdote was about his first doomed made-for-TV love story that he watched as a kid. By the end of the movie he had tears rolling down his cheeks, and his dad was sitting next to him in the recliner mentally checking "Star Quarterback" off his list of aspirations for his son. He then held up his copy of Hotel on the Corner of Bitter and Sweet and said that he'd made the literary equivalent of a touchdown.
After doing a brief (amazing) reading from the book, he opened it up to questions. I had to ask about the title. Because we historically sort of suck at titles I'm always curious about the origins of really fantastic titles and Hotel on the Corner of Bitter and Sweet definitely qualifies. Apparently his working title for the book was THE PANAMA HOTEL and then when he thought of the new title his editor and agent tried to tell him it was too long, Can you imagine? Luckily he talked them into keeping it for the galleys and the ARCs and readers loved it.
It was very cool to have the opportunity to hear Jamie speak and to purchase a signed copy of his book. If you haven't already read it, go buy Hotel on the Corner of Bitter and Sweet today. Oh and here's a really blurry picture of Jamie and me courtesy of my mom's Blackberry Storm that she doesn't really know how to use. 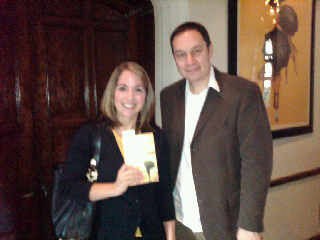 And if you haven't entered already, don't forget to comment and blog about our Karmic Kindle Contest! You have until Friday the 13th until midnight. And get a load of this fabulous button Tere Kirkland created for us! 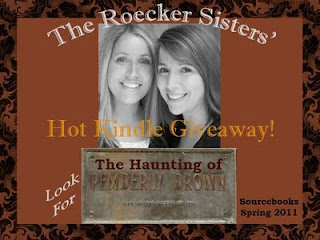 Ooo cool! I have had this book on my to read list because someone whose book I loved blurbed it. Funny how blurbs really do make me wanna read a book. I think it was the girl who wrote Snow Flower and the Secret Fan - which was incredible.

I loved Hotel on the Corner of Bitter and Sweet! That's so awesome that you got to see him speak!

so cool--I have heard great hings about his book!

Holy moly, did that contest get you a lot of followers! (I'm jealous!:)

Writing is one skill and speaking well in front of an audience is another, and I'm amazed by people who can do both. Way to go, Mr. Ford.

Cute pic, too! And, how awesome is Tere?

Very cool! I just ordered that very book, and it's sitting next to my desk in its UPS package--I just haven't had a change to rip it open and getting reading it yet. Can't wait! (And I loved the title the first time I heard it!)

That's so awesome, I have yet to attend a book signing - it sounds like you had a wonderful time...

Next on my TBR pile. The Regulator gets serious points for going with you and using the Storm, blurry picture or not. I have to coax Mr. J to come with me to all my writing related functions. He does it, but he has a far-off look in his eye. I think he's dreaming of beer and TV.

How awesome that you met him. I LOVE that book! It's absolutely brilliant.

Would you believe I've never been to a book signing?!

Author signings are so fun, I will always go when I spot one even if I don't know the author because I love to support other writers and you never know when you'll discover a great writing tip or find a new book to love.

How cool! I am starting a list of books to read. His will have to go on the top!

I wish I could have gone, I loved his book. I can't wait for the next one!

Mom's blurry pic seems to have captured a little sliver of belly. Sexy outfit for a book signing.

Too cool! I hope you took notes, you'll be up before you know it. Is that a scary thought? I think it will be awesome. Esp. since it will be the both of you.

No, I am not a Jamie Ford groupie wearing a crop top to book siginings. For the record I had a yellow shirt on underneath my sweater.

I just finished this book and absolutely loved it! Great picture by the way!

Haha, I was kidding. I know you better than that...

This book has been on my tbr list since its debut. Thanks for the recommendation, and I'm glad you had a great time.

Get used to book signings, because soon y'all will be on the other side of the table!

Very cool! Hotel on the Corner of Bitter and Sweet is a brilliant title. I haven't read it yet, but I plan to.
LOL on the shirt vs. skin thing.

Very cool! That one's on my to be read list.

And cool button. Tere's awesome! I was unplugged last week, but I'll be posting about the contest tomorrow. Congratulations, ladies!

That is the BEST title. I'm so glad he was able to stick to his guns.

We need to put that button on our blog!

Hi :)
Thank you for the great post. I'm glad you were able to attend a great event like that. Thank you for sharing the pictures too. And I wanted to say I loved the publication progression post you posted earlier with the pictures from babyhood to authorhood.
:)
All the best,
RKCharron
xoxo

Very cool! I know nothing about the book but I knew I wanted to read it when I first saw it simply BECAUSE of the title. If it was called, TPH, I doubt I would pick it up.

PS- I linked back to the Kindle Kontest on my blog. Not that my 8 little followers will do much for you, but many of them do have kids in your target audience.

What is it about a title that makes it so hard to come up with? Titles are harder for me than writing a queries.

How cool. This book is on my Kindle list right now. :) And I love love love your uber cool giveaway.

Oh man, that book was totally on my summer reading list and I completely forgot about it. Looks like I've found my book for Christmas break. It's got Asians, specifically Chinese v. Japanese, Seattle (my favorite city in the US), and WWII (one of my favorite periods in history). It's basically set up for me. I've got to read it!

I love meeting authors! They're always so warm and interesting. Thanks for sharing this book with us! Terrific title!

What a cool thing to do! Thanks for the opportunity to win the Kindle. I love to read in bed, and it's difficult to do that with the lights out. A Kindle would be just the thing! Can't wait for your book to come out.

Congrats on the book deal! Good to see a MSFV'er make it big.