The Bookanistas: What Happened to Goodbye 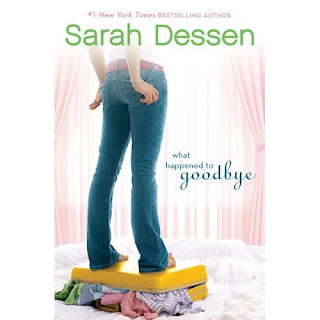 We love The Dessen around these parts. The Regulator ALWAYS has a Dessen novel queued up in her car and we have nothing but respect for the reigning queen of YA. Also her Twitter stream is refreshingly honest and random. The girl loves her Good Morning America and you got to respect that. So you can imagine the excitement in LiLa Land when we got our hands on an ARC of Dessen's upcoming novel, WHAT HAPPENED TO GOODBYE

.
Here's what the back cover has to say:
Since her parents' bitter divorce, Mclean and her dad, a restaurant consultant, have been on the move - four towns in two years. Estranged from her mother and her mother's new family, Mclean has followed her dad in leaving the unhappy past behind. And each new place gives her a chance to try out a new persona: from cheerleader to drama diva. But now, for the first time, Mclean discovers a desire to stay in one place and just be herself - whoever that is. Perhaps her neighbor Dave, an academic superstar trying to be just a regular guy, can help her find out. Combining Sarah Dessen's trademark graceful writing, great characters, and compelling storytelling, What Happened to Goodbye is irresistible reading.
Lila's Take:
Every time I sit down to read a Sarah Dessen novel, I learn something. Whether it's the way she fleshes out her characters and makes them come alive--how you meet someone and immediately categorize them but by the end of the book have a completely different viewpoint. Or the way she takes the everyday conflicts that plague all or most of us and adds a special twist to set them apart, a factor that makes every book unique, no matter how common the topic. Either way, I feel like I could either be a better writer after reading her books or am a complete hack.

In WHAT HAPPENED TO GOODBYE, we meet Mclean who moves around with her dad all the time following her parents' nasty divorce and reinvents herself in every town they land. It's hard not to see a little bit of yourself in this character, a little bit of that I have no idea who I am or who I want to be--even at *gasp* 30! And it's hard not to get a little jealous of Mclean's clean slate (and her free time--is it just me, or do you read YA books and yearn to have even a sliver of the freetime you had in high school???). She gets to start over in every town and specifically holds herself at an emotional distance to make the break a bit more clean when her dad and her inevitably leave. But, in this particular town (and if you read Dessen, you'll feel at home--BTW this is another aspect of Dessen that I LOVE--the world she's created that is interwoven in most of her books. I always want to shout HOORAY when I recognize a detail from a past book), Mclean has to do a bit less work fabricating her character. Instead, the real her (or a her she's just starting to get to know) is coming to the surface and all of the sudden instead of manipulating the details like who she's friends with and who she's supposed to be, they're all falling into place naturally. And it's jarring.

This book has all of the Dessen qualities everyone loves so much--the friendship, the love interest, a strong element of family and the conflicts that often come with the territory. WHAT HAPPENED TO GOODBYE would be wonderful for young adults who are dealing with divorce because it reminds us how complicated life has a tendency to get. Another wonderful book by an incredible author.
Check out what the other Bookinistas are up to this week:
Click here to join The Bookanista Book Club at The Reading Room where you can check out all the books we're buzzing about!

Elana Johnson reveals the cover of The Eleventh Plague

Oooo delicious!! I love her covers, they always make me happy, even if the story might be sad. They just say 'Open Me, you wanna know what's inside'

There really is something about Sarah Dessen. She could go look at the YA shelves right now, take one of the topics off the back of another back cover, and write a completely different book than the first person. She's got that pizazz.

Can't wait to read this one!

I read an ARC of this and I loved it, too. She is able to take the simplest stuff and create a book that I didn't want to put down.

I've never read her books but I see them all the time. What's a good book to start with? Any favorites?

I moved around a lot as a kid, but I wasn't confident enough to try and reinvent myself in quite the same way. I wish I would've had a book like this back then. It sounds perfectly lovely. I also adore books that bring in snippets from previous books. Like little easter eggs for fans to find. Super review!

She's so great at creating memorable characters, isn't she? I loved this book so much! Glad to see you did too!

I'm so looking forward to this one!