Bookinistas: THE RENDERING by Joel Naftali 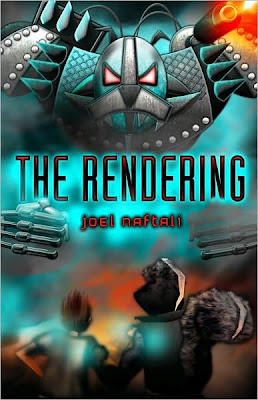 I'm not gonna lie. I don't read a ton of middle grade (anymore) and not a whole lot of boy books, so, I'm not sure I would have picked up THE RENDERING

if it weren't for the Bookinistas. But I'm so glad I did. This book made me want to shimmy my way back into a 6th grade classroom, book in hand. And trust me. That's not something I say every day.

Here's what the back cover has to say:

Thirteen-year-old Doug narrates in a series of blog posts (many interrupted by either his best friend, smart girl Jamie, or the artificial intelligence who mothers him, the avatar) how he came to temporarily save the world and to be branded a terrorist and a murderer. He was innocently playing video games in the employee lounge of the biotechnology center where his aunt was a director when an insane genius ex-employee broke in, stole the equipment to digitize anyone and make his own biodroid army, killed Doug's aunt, and blew up the center (and soon the nearby town). Doug managed to escape, accidentally creating three super-powered creatures, and gaining a electronics-destroying superpower of his own with which to fight the evil Dr. Roach.

The first thing I noticed about this book was the unique formatting. Naftali and Egmont did incredible things with the text. At one point, there's an explosion. Doug describes the floor falling out beneath him--the text mirrors this giving the book a very visual feel. Another example is during the aftermath of the explosion. Doug feels himself slipping away and says everything is fading, fading, fading, etc. With each "fading" the text gets lighter and lighter, fading away. And there's more. A lot more. It's so freaking cool.

Moving on to premise. On page one we learn that Doug is wanted for the murder of his aunt. And that he's changed his name and is in hiding. Who wouldn't want to read on to figure out what really happened? What a hook! And the story does not disappoint. Doug, the main character, addresses the audience through his blog, so we become his blog readers. I think this is unique, catchy and current (considering so many kids are blogging these days!) It also invests you in the story. An evil man is trying to take over the world (using all sorts of crazy technology) and you're apart of that world because you're a blog reader. It's very cool. The chapters are also super-short, which I always appreciate because my "I'll just read one more" turns into five, six, seven more and for younger kids with a shorter attention span, this is key. The book is well-paced and full of adventure. The story moves.

Next up, voice. Doug is hilarious. His voice jumps off the page and I found myself laughing out loud. I enjoyed the chemistry between he and his best girlfriend and the relationship he shared with his aunt. She interrupts his blog posts throughout and they share funny asides. And then you have the CyberSkunks. That's right, armor-wearing, leather-clad, mohawked skunk-people. And they're hilarious.

is the book of every awkward, fidgety, bored, video-game-obsessed middle school boy's dreams. If only I had this little gem during those long and painful monitored reading sessions in the classroom where instead of reading, some boys stuck pieces of paper in girls' hair or sharpened their pencils ten million times. It would have saved me a whole lot of headaches and lunch detentions.
Check out what the other Bookinistas are up to this week:

PS: Join us over at Bloggers (Heart) Books and at Shana Silver's blog today on the tour. And don't forget to enter to win the $100 Amazon gift card. It's burning a hole in our pockets!

PPS: The winner of THE SKY IS EVERYWHERE Give It Forward contest is Lindsay! Lindsay, we'll email you for your address so we can start spreading the love!
at March 03, 2011

This reminds me of how I feel about Liar Society. If I didn't know you guys and wasn't already aware of how funny you were, I would NEVER buy a book about a pearl bedecked teenage detective who has an eye for abs.

But I'm reading it right now, and in spite of the lack of sword fights, martial arts, and magic, I'm actually loving this book. Kate is so damn clever, and hilarious in a way that can entertain a grown man, without making me doubt the authenticity of her voice.

I'm glad you guys did this one! Good, middle-grade boy books are so needed in libraries. I would've loved to be able to hand this to one of my 7th grade goofballs and wait for him to come back asking for more.

Yeah, I never would have picked that up. It looks like the very definition of a boy book. But I love the cover blurb and the idea of the design mirroring the words. So cool.

There's a word for this, when the actual format of a poem mirrors the subject? Gads, it's escaped me, but it sounds like this book is similar? It's such a cool concept, and when it's done well, it's amazing. Add into that a strong, funny voice and a ton of action? Sounds like a winner of a middle grade! Great review!

Must get this book for my ten-year-old! Thanks for the review.

I LOVE when the text uses a style and not just words! So cool.

But it's hard to concentrate because the UPS lady just dropped off a certain book that I have been waiting for...

I haven't heard of this one but I'm so intrigued by the text effects! I bet that really enhanced the story. Would look awesome as an iPad app I think! I can picture the text jittering and breaking apart as you're trying to read the page.