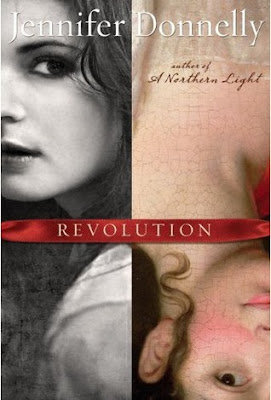 . The blogosphere has been buzzing about this book. We've even heard rumblings that it should be nominated for the Printz. REVOLUTION

is one of those books that you just have to talk about after you've read it. Some people in our book club loved it (us!) and others, not so much. Either way, it's a conversation-starter.
Here's what the back cover has to say:
BROOKLYN: Andi Alpers is on the edge. She’s angry at her father for leaving, angry at her mother for not being able to cope, and heartbroken by the loss of her younger brother, Truman. Rage and grief are destroying her. And she’s about to be expelled from Brooklyn Heights’ most prestigious private school when her father intervenes. Now Andi must accompany him to Paris for winter break.
PARIS: Alexandrine Paradis lived over two centuries ago. She dreamed of making her mark on the Paris stage, but a fateful encounter with a doomed prince of France cast her in a tragic role she didn’t want—and couldn’t escape.
Two girls, two centuries apart. One never knowing the other. But when Andi finds Alexandrine’s diary, she recognizes something in her words and is moved to the point of obsession. There’s comfort and distraction for Andi in the journal’s antique pages—until, on a midnight journey through the catacombs of Paris, Alexandrine’s words transcend paper and time, and the past becomes suddenly, terrifyingly present.
Lila's Take: Viva la REVOLUTION

, baby. There's so much to love about this book. Donnelly's voice and knack for dialogue had us hooked from the get go. Add in some fascinating history about the French Revolution and we were in love. REVOLUTION

is a riveting contemporary/historical mash up and we devoured every page. Even better there's this one controversial plot twist (if you've read it, you totally know what I'm talking about) that makes this a great book for discussion. So go read it now so we can dish. Dying to know what you guys think about it...

In the meantime, check out what the other Bookinistas are up to this week!
Christine Fonseca recommends JOEY FLY, PRIVATE EYE in BIG HAIRY DRAMA
Elana Johnson raves about MATCHED
Shannon Messenger loves on ANNA AND THE FRENCH KISS and offers a Giveaway
Megan Miranda celebrates DESIRES OF THE DEAD
Beth Revis sings the praises of CHIME
Bethany Wiggins cheers for FIRELIGHT
at December 02, 2010

You guys and your books about private schools. Now wonder we're such good friends, I attended two stuffy prep academies before I started getting in trouble as a kid.

Seriously though? This sounds like another good one, thanks for filling us in!

*whispers* I still haven't finished it. *hangs head in shame*

I have heard about this book and sounds like the kind I love - contemp. with a bit of history thrown in. I'll get it in the next couple months!

I've looked at this book several times and I love the cover. I'll be sure to pick up a copy. Thanks for the review!

Sounds good. And the controversial plot twist has me curious!

I'm in love with this book and no one can dissuade me from it. It's so rich, and the characters won me over from the start. Everyone needs to read it!

I can't wait to read this book! The cover itself is intriguing to me!

I loved it. How could I not? Donnelly made me cry by chapter four! And her history is flawless. Like you said in an earlier post, it (almost) made me want to quit because she's so darn good, what am I thinking?

I loved this book (and wished I would have been able to meet up with you all to read it!). I love how you learned about the history of the Revolution, but it didn't feel like you were learning. This is one of the top books that I read this year.

Add my voice to the LOVED it list. I was drawn in and carried away.

This sounds so good!!

Looks like another book for the TBR pile. I read a book in high school that had a similar contemp/historical bent and I really enjoyed it, so I quite like the sound of this. :)

I haven't read it yet but I loved Northern Light and I really want to read this one, too.

I *think* this book is wasting away in my tbr pile with all the rest of my paper books. I'll have to check it out, thanks, ladies!

It's crazy that I've never read historical YA especially considering that I find history so interesting. I think this book sounds so fantastic. I really need to read it.