The Best of LiLa: Twilight the Movie

Well, last night was the big night. That's right. We watched the movie Twilight for the first time. We've read all the books, but after hearing terrible reviews of the movie itself we knew this was a feature film we had to watch in the privacy of our own home. I mean, what's the point of watching a bad movie if you can't mainline Diet Coke and Twizzlers with the option to replay scenes like Edward running up the mountain with Bella on his back over and over and over again. (We seriously almost peed our pants.)
As you can imagine we have a lot of commentary on the movie itself. We could literally go on for days. But in the interest of time we'll wrap this up with two things:
First off, the movie is AWESOMELY bad. Seriously. It's terrible in the best way possible. (We were officially hooked a mere 11 minutes 24 seconds in.)
And secondly.... 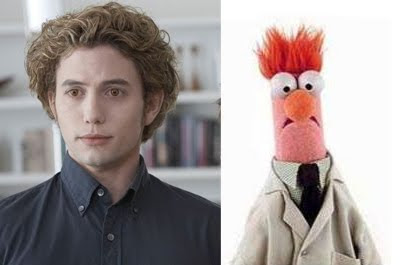 LOL. I feel exactly the same way. and i almost peed my pants from that jasper-resembling sesame street character. bwahaha.

I have to agree. I just watched Eclipse with my mom and I so disagree with the casting of Emmett and Beaker. ;)
New Moon was the better of the three movies, but still many scenes are laughable!!
Though I'll probably sit through Breaking Dawn when it's out on DVD....

Ha ha ha! Love it! I especially loved his perm during the Civil War. How fashion-forward of him. My husband and I couldn't stop laughing at that constipated look he always has. Ah, Twilight, always good for a belly laugh.

I have to say... I am LOVING the vintage Lila posts! So dang funny!

So what did your husband get you this year? Bedazzled jeggings?

bwahahahaha!! Totally cracked me up. Love how bad that movie is too. Ugh!

Oh my gosh, that is hilarious!

lolol I can't stop laughing over the side-by-side pics!