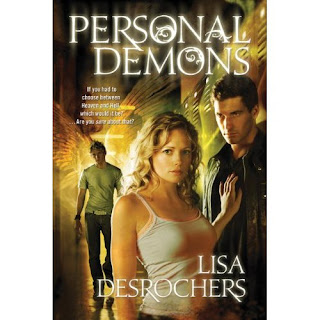 Today we're thrilled to announce another Guestanista post by Kylie Rush, Matt Rush's fabulous daughter. Kylie is *gasp* an actual young adult and she has an incredible perspective. Enjoy!
Here's what the back cover has to say:
If you had to choose between Heaven and Hell, which would it be?
Are you sure about that...?

Frannie Cavanaugh is a good Catholic girl with a wicked streak. She's spent years keeping everyone at a distance--even her closest friends--and it seems her senior year will be more of the same...until Luc Cain enrolls in her class. No one knows where he came from, but Frannie can't seem to stay away from him. What she doesn't know is that Luc works in Acquisitions--for Hell--and she possesses a unique skill set that has the king of Hell tingling with anticipation. All Luc has to do is get her to sin, and he's as tempting as they come. Frannie doesn't stand a chance.
Unfortunately for Luc, Heaven has other plans, and the angel, Gabe, is going to do whatever it takes to make sure that Luc doesn't get what he came for. And it isn't long before they find themselves fighting for more than just her soul.
But if Luc fails, there will be Hell to pay...for all of them.
Kylie's Take:
Lisa Desrochers tells an intriguing tale in Personal Demons. Teen readers (especially the females) will identify with Frannie, the protagonist, from the get go. Being the only member in her large Catholic family to ever be expelled from school makes her just enough of an anti goody-goody to not be boring. She also suffers from chronic boy issues, which I can relate to.
Frannie is pursued by two boys … who aren’t actually boys. Lucifer and Gabriel are out for her soul, but they also want her affection. This keeps the story interesting for girls who like all different kinds of guys. Bad boys, knights in shining armor, silly rockers, and everything in between.
Boys, friends, the difference between right and wrong and being popular, changes, guilt, and the hell we know as high school all come together in this beautifully written novel of love, religion, and finding who you are.
Personal Demons will certainly tag your soul!

Um...how cute is Kylie? There is absolutely no way we could ever match this!
Check out what the other Bookinistas are up to this week.

Umm, I haven't read this book, but there is apparently even an inside joke in this review! Very clever sweetheart, very clever.

I just finished the book last week. I wish the main character had been more decisive. But I enjoyed the book overall. Definitely a clever premise. Wonder when there will be a second book because there's definitely a second story here.

Great review! I loved the book!

This should've been on the cover:

Lucifer and Gabriel... for girls who like all different kinds of guys.

Matthew will be so proud! Cute review.

Move over LiLa, I think Kylie had taken over Bookinistas! Thank you K for this review, esp. since this is one of th next ones on my to-read list!

Nicely done, Kylie! I love your perspective! And could the inside joke be about a silly rocker you have your eye on? ;)
And is Frannie wearing a Victoria's Secret Miraculous bra on the cover?

Well done, Kylie! I was intrigued with the book before I read your review and now I REALLY want to read it! Thanks! =)

Thanks to L&L for this review.

P.S. If you get a chance, please check out today's anonymous critique!

Nicely done with your review Kylie.

Great review Kylie. Thanks for sharing your insights with us.

What I loved about this book is that the angel is kinda bad and the demon is kinda good. :)

Okay, so I totally want to steal Kylie from you guys. Please please please let me steal her. :P

Seriously, she's a great reviewer! I love the teenager's perspective, especially hers. Refreshing. Also enjoyed PD, so my guess is we have the same tastes, too.

P.S. By PD, I did not mean what you think I meant. I meant Personal Demons, not purple dinosaurs.

It was a pretty darn good book! Great review!

Love, love love! I was so lucky to win a personalized signed copy!!! :-)

It's great to get the perspective of a YA!

Wow, Kyle! Nothing makes my day like hearing that a teen enjoyed my book. These are the reviews that mean the most to me, so thankyouthankyouthankyou!!! :p

And thanks to LiLa for posting =)

Another great review by Kylie! You guys better watch out or she'll branch off on her own. :D

I think I love her! How awesome is this review??? I want to read this now.

Ding! We have a winner. That's the inside joke Leigh (apparently, again, I haven't read this one).

And Kylie, honey ... did you see that? That's THE AUTHOR, responding to your thoughts. I am SO PROUD of you right now, I'm about to become a tear dropper (that's what my kids call me when I cry during movies), and if you'll do the kitty liters when you get home from school today, I'll give you a hand!

Hey guys, its Kylie! (I was too lazy to log my dad out)

Thanks sooooo much for all the love! Makes my crappy week better. *insert smiley face here*

I love getting on and checking out everyone's comments... They make me feel all warm and fuzzy...

Off to vanquish the beast known as homework,
Kylie

PS: I like purple dinosaurs who are NOT named Barney.