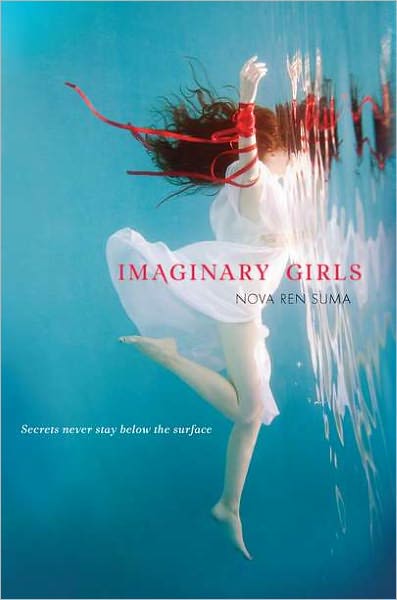 First things first, the cover. THE COVER. ﻿You can't talk about this book without first drooling over the cover. It's eery and striking--perfectly indicative of the words contained inside. And isn't that what it's all about? I know that covers are a marketing tool--pick me up, buy me. But there is absolutely nothing more satisfying than when you read a book and quickly realize that the cover suits the book perfectly. It is such a good feeling.
What the back cover has to say:
Chloe's older sister, Ruby, is the girl everyone looks to and longs for, who can't be captured or caged. When a night with Ruby's friends goes horribly wrong and Chloe discovers the dead body of her classmate London Hayes left floating in the reservoir, Chloe is sent away from town and away from Ruby.

But Ruby will do anything to get her sister back, and when Chloe returns to town two years later, deadly surprises await. As Chloe flirts with the truth that Ruby has hidden deeply away, the fragile line between life and death is redrawn by the complex bonds of sisterhood.

The cover will obviously get you to buy the book and then the story will take you on a very unique adventure like nothing I've ever read before. I know I say that a lot, but this time I mean it! I MEAN IT. How many times can you say you've read about a resevoir that is rumored to have a drowned city below the surface? Creepy, right? Or a girl who dies and is brought back to life somehow? And yes, I'm sure you've read about all sorts of sister relationships, but I can assure you none of them have quite been like Chloe and Ruby's.

And then there's the writing. It's hard to believe this is Nova Ren Suma's debut novel. Her writing seems so experienced--it's the kind that makes you ashamed you've ever even tried to write! It's tense and vivid and poetic and filled with imagination. Woven throughout the plot is a thread of magic and mysticism, which makes the book stand out in that truly unforgettable way.

And no review of IMAGINARY GIRLS would be complete without discussing Ruby's character. She's one of those larger than life characters who jumps right off the page and grabs hold of other characters as well as the reader and never lets go. You listen to Ruby. You do what she says. You follow her. Because there is something in the way that she is that demands it. I'd like to know a Ruby just to see what it'd be like.

If you're in the mood for something completely different and entirely creative, give IMAGINARY GIRLS a try. The magic will lure you in, so beware, you're sure to have some late nights ahead!


Check out what the other Bookanistas are up to this week:

I'm glad you liked it. I just bought this book and will be starting it soon. Can't wait!

I've been so interested in this one since it came out, and I have it too! Just need to finish off these library books before I can get to it, but now I've got more motivation to hurry up. :)

I bought this book because of the cover.

I liked this book too. And it was edited by one of my faves, so I totally bought it for that reason. And yeah, the cover is pretty gorgeous.