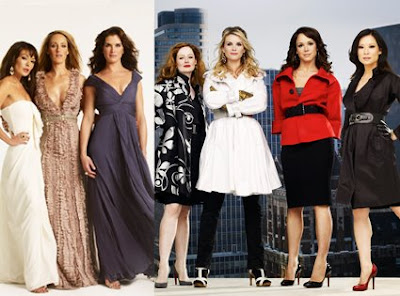 I remember the day when I heard that Darren Starr and Candace Bushnell were creating competing television shows. Apparently, it was supposed to be one fabulous show when the two were living together, but then they stopped living together and suddenly we had two pilots marketed as Sex in the City for network television. I couldn't wait to watch either show, but initially I ended up on team Cashmere Mafia. Pat Fields did the wardrobe for the show and Lucy Liu had some really horrible/fabulous ensembles a la Carrie Bradshaw. Plus I found all of the characters surprisingly entertaining. Of course, it turns out I was one of 5 people watching the show and it got cancelled about half-way through it's premier.

Anyways, I was sort of forced onto the Lipstick Jungle bandwagon. Initially Brooke Shield's constant pinched expressions freaked me out a little bit and Andrew McCarthy's shrunken, wrinkled face made me want to re-watch Pretty in Pink. But this season they must have given Brooke some Xanax and Andrew a mini-face lift because I found myself sort of loving the show. And all for naught when they cancelled it yesterday.
Hmm...looks like a spot on my esteemed TiVo list has opened up, anyone have any suggestions on how to fill it?
at November 13, 2008

I agree, last season was okay, but this season has been AMAZING. So amazing I didn’t even mind all of the Maybelline product placement. ("The eyes aren’t popping; use the Maybelline she needs more volume!” – Victory Ford) This is right up there with My So Called Life and Models Inc.

There might be good news!!! Did you see this?

OMG - do you think she's having some sort of psychological break or is there really hope!? She sounds a little unhinged in the interview, no?

P.S.
Hilarious that we both love this show. Thank god I'm not alone.