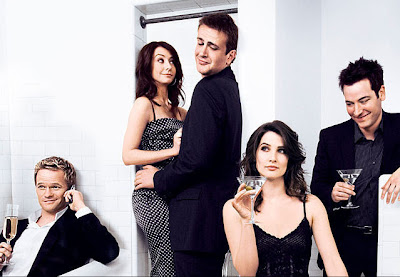 I've decided to start a new feature on our blog where I tell all of 3 of my loyal blog readers what they should be watching on tv. As you all know, I watch pretty much everything and I think we can all agree that my standards aren't high. However, I know good tv when I see it, so let me help you program your DVR. I promise not to let you down.
So, for my inaugural TV Slut Says here are the Top 10 Reasons You Should be Watching "How I Met Your Mother" every Monday night at 8:30 EST on CBS.
10. The dad from the "Wonder Years" was on tonight's episode, and seriously, who doesn't love the "Wonder Years"?
9. Robin Sparkles. They make fun of Canadians regularly. If there is one thing that is always guaranteed to make me laugh it's Canadian jokes. I honestly can't tell you why, I don't even know any Canadians personally, but I've always found it hilarious. Anyways, when they made Robin Scherbotzky a former Canadian 80's pop princess who dated another Canadian pop star, played by the one and only James Van Der Beek (yeah you know the guy from Dawson's Creek with the insanely large noggin?), they earned their TiVo season pass. The music videos alone are worth your viewing pleasure. Click here and here to see what I mean.
8. Marshall's hair. Not sure what's going on with his hair this season, but it's riveting. Umm...producers, can we please fix this? Marshall is way too cool for a mullet/combover and yet I sort of love it. I apologize that I can't find a picture to sufficiently illustrate just how bad this hair is, so you'll just have to watch and see for yourself.
7. It's a sitcom! And when is the last time you watched a real sitcom with a laugh track and everything (and no, Seinfeld and Friends re-runs do NOT count)? Honestly, the laugh track threw me off a little bit at first. You don't realize it, but very few shows have laugh tracks anymore. Anyways, I love that it's a 30-minute show that requires very little thought, but is still fun and witty.
6. Bob Sagat is the voice of the Dad. The whole premise of the show is that a father is telling his kids all about how he met their mother, so every week is a new story about his life in NYC in his late 20's early 30's and they all lead up to the big reveal. The voice of the grown up dad is Bob Sagat and he like knows the Olsen Twins PERSONALLY, not to mention Uncle Jesse and Uncle Joey.
5. It's a mystery...well, it's sort of a mystery anyways. Basically, everyone is always trying to guess who the mother is and we get little clues every now and then and it's really fun I promise. The mom has a yellow umbrella and is not Robin. Uhh, not that I'm keeping track or anything.
4. It's based on a true story. One of the writers is Marshall! No, not the actor who plays Marshall, but the actual guy. He based the character off of himself and that means that all of the Marshall/Lily stuff actually happened. They are such a cute couple and I love knowing that some version of them actually exists in real life.
3. This show made me cry and I'm not ashamed to admit it. Ok, fine, I was sort of ashamed to admit it, but still...Suffice it to say, that there are lots of Ross and Rachel type moments in the show that would make people like my mom really happy.
2. Barney Stinson. Barney is hands-down the best comedic character on tv. Screw Dwight Schrute. Suck it Ari Gould. I'm Team Barney all the way. In tonight's episode alone Barney taught us about something called the "cheerleader effect" defined as the phenomenon of girls out in a group always looking attractive, but take the girl out of the group and she's a dog. Seriously, it's inspired. He then creates "Not A Father's Day" when he finds out that he didn't knock-up one of his one night stands. This led to him giving Marshall a "Thai you would actually wear" in celebration. Comedic. Genius.
1. Neil Patrick-Harris. Ok, so technically he's the actor who plays Barney, so this is sort of cheating. However, he's so awesome that he truly deserves to be mentioned twice. This is the man that brought us Doogie Howser M.D. The man who did the funniest cameo I've ever seen in a movie. In Harold and Kumar Go to White Castle, he was snorting lines of coke off hookers and using his Doogie status to steal cars. Legen....wait for it....wait for it....dary!
at November 11, 2008

TV Slut: I love this new feature on your blog. Your "Top 10 for 'How I Met Your Mother'" made me aware that I’ve been missing out on this sitcom gem! Needless to say, my TiVo has now been set to start recording Monday night at 8:30 EST. Please keep the recommendations coming....